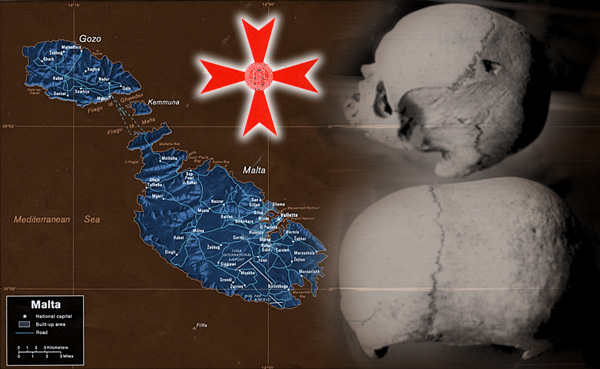 In the megalithic temple of Hal Saflienti, in Malta, men with extraordinary cranial volume were buried. These skulls seem to belong to a strange human stock and if properly analyzed, could create an ideal link between the ancient Mesopotamian and Egyptian cultures and a race of sacerdotal men identified with the snake.

We are back from a visit in Malta among the suite of Maurizia Giusti, alias Syusy Blady and the crew of her Italian national TV show, "Tourists by Chance". Together, we followed the traces of an ancient story that originated from the presence of megalithic temples dedicated to the Mother Goddess on the island, a thaumaturgic figure, adored in pre-historical times of this island that was to become an important cult center. The coverage gave us the possibility to try to resolve a mystery of interesting implications. It was known that until 1985 a number of skulls, found in pre-historic Maltese temples at Taxien, Ggantja and Hal Saflienti, were exposed in the Archeological Museum of the Valletta. But since a few years ago, these were removed and placed in the deposits.

From then, they were not to be seen by the public. Only the photographs taken by the Maltese researcher Dr. Anton Mifsud and his colleague, Dr. Charles Savona Ventura, remained to testify the existence of the skulls and prove…their abnormality. Books written by the two Maltese doctors, who since our first day in Malta helpfully provided us the necessary documentation for our research, illustrate a collection of skulls that show peculiar abnormalities and/or pathologies. Sometimes inexistent cranial knitting lines, abnormally developed temporal partitions, drilled and swollen occiputs as following recovered traumas, but above all, a strange, lengthened skull, bigger and more peculiar than the others, lacking of the median knitting. The presence of this finding leads to a number of possible hypotheses. The similitude with other similar skulls, from Egypt to South America, the particular deformity, unique in the panorama of medical pathology referred to such distant times, (we are talking about approximately 3000 BC) could be an exceptional discovery. Was that skull a result ancient genetic mutation between different races that lived on that island? 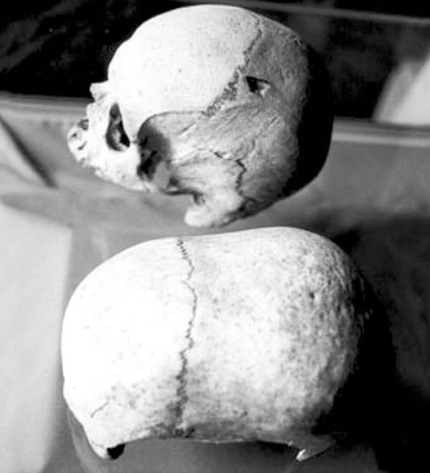 A request to the museum's management by the show's producers to see and film the exhibits would have certainly failed if it weren't for the intercession of the minister of tourism, Michael Refalo, whom we met at the end of a press conference hosted by Maurizia Giusti (and of course, us of HERA) organized by Dr. Robert Zammit, of the Maltese Provincial Tourism Board. The minister, whose interest in the matter we enhanced, accompanied us personally to the nearby museum, snatching the director's permission to bring out those mysterious craniums, conserved far from the sight of curious onlookers and researchers since about 15 years. A couple of days later, in fact, guided by the museum's authorities, we were received in a reserved area, closed to public, where the extraordinary exhibits were brought, before our eyes, under the supervision and gentle accessibility of the museum's archeologist, Mark Anthony Mifsud, almost homonymous of the previous researcher.

The skulls were all found in the Hal Saflienti hypogeum, where a sacred well was dedicated to the Mother Goddess and where also the small statue of a sleeping goddess was found, associated to a relic with a snake inscription on it. The skulls were brought out of their box one at a time. Among these, all very interesting, was the one we were looking for. The cranium showed a very pronounced dolichocephalous, in other words, a lengthened posterior part of the skullcap, besides the lack of median knitting, technically named "sagitta". This last detail has been considered "impossible" by medics and anatomists to whom we turned, not having (as far as known) analogous pathological cases in international medical literature. It is a characteristic that emphasizes the anomaly of this finding with the result of producing a natural lengthening of the cranium in the occipital area (not due to bandaging or boards as used in pre-Colombian civilizations). We believe that the discovery of this skull and the like at Hal Saflienti isn't accidental.

The Priests of the Goddess

Malta and Gozo were very important centers since pre-historic times, places where "medical cures" were conducted, oracles and ritual encounters with the priests of the goddess. There, on both the islands, existed many sanctuaries and thaumaturgic centers, where priests surrounded the healing goddess, direct expression of her divinity. It is well known that, in antiquity, the serpent was associated to the goddess and to healing capacities. The snake also belongs to the subterranean world. Therefore, a hypogeum dedicated to the goddess and the water cult was the right place for a sacerdotal group that was defined, in all the most ancient cultures, as the "serpent priests".

Perhaps the skulls found in the hypogeum and examined during our visit to Malta, belonged indeed to these priests. As mentioned before, they present an accentuated dolichocephalous, which is particularly the center of our analysis. The long head and drawn features must have given a serpent-like appearance, stretching the eyes and skin. Lacking the lower part of the exhibit, we can only speculate, but the hypothesis can't be far from reality, a reality worsened buy the fact that such deformities certainly created walking problems, forcing him…to slither! The lack of the cranium's median knitting and therefore, the impossibility of the brain's consistent, radial expansion in the skullcap, did so that it developed in the occipital zone of the cerebellum, deforming the cranium that looked like a single cap from the frontal and occipital area. This must have certainly caused the man terrible agony since infancy, but probably enhanced visions that were considered as being proof of a bond with the goddess.

Another race
Even the other skulls we examined presented strange anomalies. Some were more natural and harmonic than the cranium that mostly gained our attention, but they still presented a pronounced natural dolichocephalous and we could assume, without fear of refutation, that it is distinctive of an actual race, different to the native populations of Malta and Gozo. This consideration was confirmed by the Maltese archeologists themselves, Anthony Buonanno and Mark Anthony Mifsud, who said:

"They are another race although C-14 or DNA exams haven't yet been performed. Perhaps these individuals originated from Sicily".

Read the rest of the article here

All over the world elongated skulls have been found. Some of the Pharoahs of Egypt had very elongated skulls. For example Ramases II and most surprisingly Nefertiti. There are many theories of why these people had skulls like this. One normal explanation for the imagery of elongated skulls is that it was a certain style of art work, Amarna Art.

Malta was very likely to be an important place in the old days. After all it had many very old temples. There are reports of the "Serpant race" or Snake Priests being in charge. The idea that esoteric knowledge would be kept in a "race" or class of people is not surprising, after all the Jews have their own Priest Tribe, the Celtics had the Druids etc.

Acts 28
1. And having been saved, then they knew that the island is called Melita (Malta),
2. and the foreigners were shewing us no ordinary kindness, for having kindled a fire, they received us all, because of the pressing rain, and because of the cold;
3. but Paul having gathered together a quantity of sticks, and having laid [them] upon the fire, a viper -- out of the heat having come -- did fasten on his hand.
4. And when the foreigners saw the beast hanging from his hand, they said unto one another, `Certainly this man is a murderer, whom, having been saved out of the sea, the justice did not suffer to live;'
5. he then, indeed, having shaken off the beast into the fire, suffered no evil,
6. and they were expecting him to be about to be inflamed, or to fall down suddenly dead, and they, expecting [it] a long time, and seeing nothing uncommon happening to him, changing [their] minds, said he was a god.

This sound like a straight forward account of a man being bitten by a snake but the problem is that Malta has no and has very likely never had poisonus snakes.

The bible deals in lots of stories with images and parables. Was this such an example? Was Paul attacked or attacking the local belief system when he came to the island, was he in conflict with the Serpent Priests?

Is there any evidence of the "Serpent Priests" on Malta and are they connected to the other ancient civilisations and Priest/God races, for example the Egyptians?