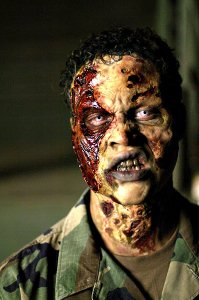 The scientist responsible for some of the Pentagon’s wildest research has devised methods that could one day save trauma patients, and even extend the shelf life of transplant organs. Step one: Suffocate the wounded. Step two: Put ‘em on ice.

Mark Roth, a biochemist at the Fred Hutchinson Cancer Center, has been working on suspended animation - inspired by the processes of animal hibernation - for years now. In 2005, with funding from Pentagon far-out research arm Darpa, Roth managed to reanimate rats suffering from massive blood loss, using hydrogen sulfide to knock them out and curb their oxygen consumption.

Since then, Roth has made significant progress. His hydrogen sulfide procedure has completed phase 1 of the three clinical trials required before FDA approval. And he’s moved onto a new, related method that could boost trauma survival even more effectively.

"A lot of animals hibernate through the winter, and they share two key features: They get really cold, and they use very little oxygen," he tells Danger Room. "So we wanted to know ‘what’s the relationship between those two features’"?

By studying brewer’s yeast and nematode worm embryos, Roth and his team determined that "a coordination of life processes," reacted in sync - and kept the organism alive - after oxygen was reduced and their temperatures were lowered. In his tests, 66 percent of the yeast and 97 percent of the nematodes outlasted the cold exposure - and were good as new, once reheated and exposed to oxygen.

Though the precise mechanism by which the process works hasn’t been pinpointed, the team observed that "certain sub-cellular processes are going on, but really shouldn’t be," Roth says.

Roth’s Darpa-funded research might come in handy as he works out the kinks in this new procedure. Since hydrogen sulfide reduces an organism’s consumption of oxygen, it might be just the compound to use prior to putting people, or organs, into the deep freeze.

Once mastered, the method would buy time for trauma patients, including heart attack victims and those suffering massive blood loss. Of course, that’s where the Pentagon’s interest lies: keeping injured troops alive until they can get adequate medical treatment.

It could also help doctors make the most of therapeutic hypothermia, the process of cooling down patients with the intent of improving their odds of survival and preventing brain and organ damage. Roth foresees a drug that could combine the right sequence of oxygen deprivation and hypothermia, without dangerous side effects that can accompany the procedure.

Not only could Roth’s research save lives and revolutionize organ transplant surgeries, but it also pares survival down to its smallest iota. "The underlying relationship between living and dying," Roth says, "really has to do with this proper order of these cellular relationships."