The real meaning of Jaws 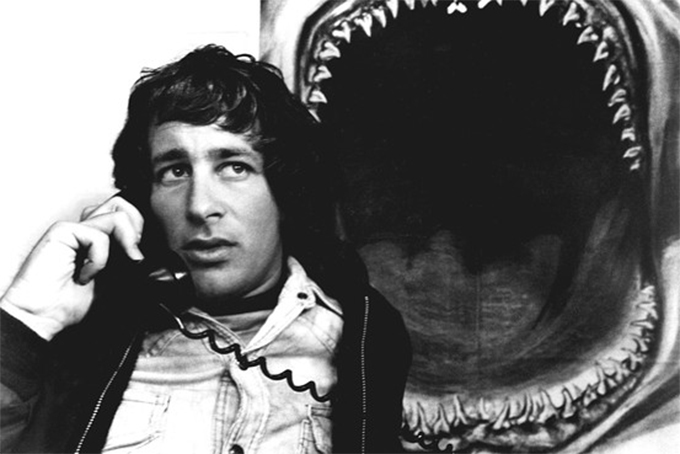 This month marks the 40th anniversary of Steven Spielberg's film Jaws. You may be very familiar with the film but did you know that Jaws can be read as Jewish? For example, why is the film even called "Jaws" in the first place? It is because the title is only one syllable away from the word 'Jews'. But there is much more to it than that and Spielberg and the team behind the movie give us a series of other subtle clues.

Jewish writer Howard Sackler was asked to contribute to the screenplay because of his experience as a scuba diver. He did not receive a screen credit, though, as he felt that he didn't work long enough on the film. Nevertheless, Sackler's contributions helped to infuse Jaws with a subsurface Jewish sensibility. Sackler, who hailed from the Bronx was a classmate of the great Jewish director Stanley Kubrick, whom Spielberg greatly admired. Sackler also wrote the screenplays for Kubrick's first two films Fear and Desire (1953) and Killer's Kiss (1955) respectively. 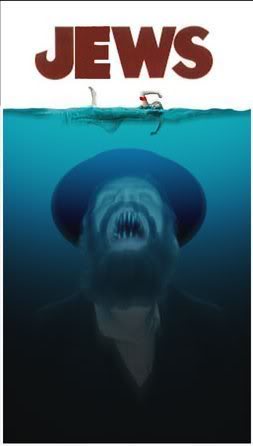 The image of Jews as sharks has also been around for a long time. Consider the idea of Jewish loan sharks, raising the "vig", or Shylock desiring his pound of flesh. Jaws feasts on multiple pounds of flesh in the film. Just Google Jews and Jaws and any number of images that have replaced the shark with a stereotypically Jewish caricature will come up.

The shark is depicted as an outsider who doesn't belong. A wandering, nomadic predator, Jaws is an unwanted presence in the small American coastal resort of Amity (which means ''friendship''). Amity was most likely the type of place that was probably restricted to Jews in the past. The film makes much of the town's close-knit nature and its white picket fences. It is populated by people with such gentile names as Quint and Brody. Jaws' invasion disrupts this quintessential all-American idyll, as if he was a metaphor for immigration.

Spielberg named the mechanical shark ''Bruce'' after his lawyer, Bruce Ramer. So not only is Jaws Jewish, he is also an attorney! Ramer later became national president of the defence organisation, the American Jewish Committee (1998-2001).

The very idea of having a Jewish shark as a protagonist raises the ugly head of the historic blood libel. It taps into age-old fears of the Jew as predatory, lusting after gentile women and the blood of young Christian children. Surely, then, it is no coincidence that the first victims in the film are a (presumably) non-Jewish blonde and a young boy. Indeed, the poster for the film plays on these fears in its depiction of a blonde female swimmer being menaced by the huge (read: phallic) shark.

And when one character states, ''It wasn't Jack the Ripper, it was a shark'', this allusion implicitly compares Jaws to the infamous Victorian serial killer who was also alleged to be Jewish.

Whenever Jaws appears the colour yellow is prominent in the background. Yellow has long been associated with Jews ever since it was the colour of the badge that Jews were forced to wear in medieval England and later continental Europe, culminating in the Jewish Star of the Nazi period and yellow triangle of the concentration camps.

Made only a couple of years after the Yom Kippur War, Jaws can also stand in as the tough Israeli Jew. A ruthless and efficient killer, he anticipates Spielberg's 2005 film, Munich. If you think this is a stretch, then read the reports of how the Egyptian media and authorities accused tourist-killing sharks of being Mossad-trained spies.

Certainly Spielberg seems to identify with the shark. He said that when he first read the novel, he found himself rooting for the shark, because the human characters were so unlikeable. This explains the high number of point-of-view shots in the film, where we see things from Bruce's subjective perspective, that is, of the shark (this was also dictated by pragmatic concerns as ''Bruce'', the mechanical shark, kept breaking down).

We can also interpret this as a projection of Spielberg's own sense of childhood otherness among a largely gentile population in which there were few other Jews. Spielberg recalled being physically bullied and subject to antisemitic comments as a child.

Another Jew is drafted in to help hunt down Jaws, possibly along the lines that it takes one to know one. A young, Richard Dreyfuss, whom Spielberg called his ''alter ego'', plays Hooper, the oceanographer and shark expert. In stereotypical fashion, he is the rationalist, sceptical intellectual, whose knowledge is invaluable in the shark hunt.

When Hooper takes to the seas with police chief Brody (Roy Scheider) and grizzled seaman Quint (Robert Shaw), Jackie Mason's quip ''Is there a bigger shmuck on this earth than a Jew with a boat?'' immediately comes to mind.

Stereotypically, Diaspora Jews have not been seen as a seafaring people and when we see Hooper initially neither are we convinced. He seems more like a student rabbi who has inadvertently taken a wrong turn.

Indeed, when he is aboard the boat hardboiled Quint gives him loads of stick, reflecting their public off-screen relationship in which they did not get on at all. Shaw accused Dreyfuss of cowardice and suggested that Dreyfuss would only have a career ''if there's room for another Jewish character man like Paul Muni.'' But Hooper does play to type at times. Like a stereotypical Jew, he is always eating (just like the shark who has no table manners, another stereotypically Jewish trait).

But Hooper proves himself to be tougher than that. When he faces off against Jaws, it is the diaspora Jew vs the tough shark and the former wins. Hooper is thus the brave Jewish outsider coming to the rescue of the gentiles.

He ultimately disputes Jackie Mason's quip about Jews on boats. In fact, he outlives Quint who becomes the shark's fifth victim (hence his name, Latin for five or fifth). In an act of possible retribution for his harsh treatment of Hooper, Spielberg stages Quint's death as particularly gruesome.