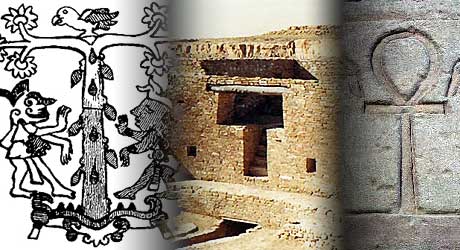 The T-shaped doorway or window appears as a common architectural motif in stone masonry villages all across the Anasazi (ancient Hopi) Southwest. It is found, for instance, at Chaco Canyon in northern New Mexico and Mesa Verde in southwestern Colorado. 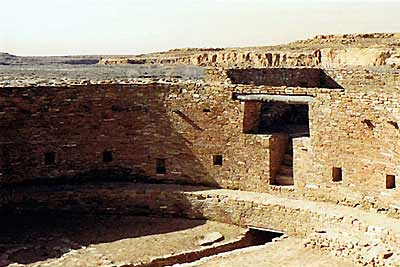 Steps leading through a T-shaped doorway down into Casa Rinconada, the Great Kiva at Chaco Canyon, New Mexico
In Greek the letter T is called tau cross, which echoes the name of the Hopi sun god Tawa. Every day the sun emerges from the Underworld through a T-shaped doorway, the horizontal bar serving as the horizon. At some point in the past the form of the Hopi kiva (subterranean prayer chamber) changed from round, like the one at Chaco Canyon, to rectangular, located on an east-west axis. The floor plan was sometimes widened at one end to reflect the T-shape. Hopis say that this form represents the traditional male hairstyle of bangs falling down over the ears.

Masau’u is the name of the Hopi god of the Underworld, fire, and death. His head is sometimes carved in rock art as a modified rectangle to suggest a stylized skull. 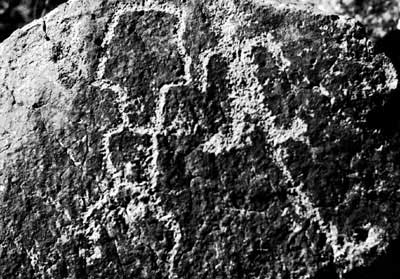 Petroglyph of two humanoids, Perry Mesa Ruins north of Phoenix, Arizona.
The figure on the left with the T-shaped head may represent Masau’u.
We also find the T-shaped cross far to the south at the Mayan city of Palenque in Chiapas, Mexico. Specifically, a number of T-shaped windows were incorporated into the building called the Palace. 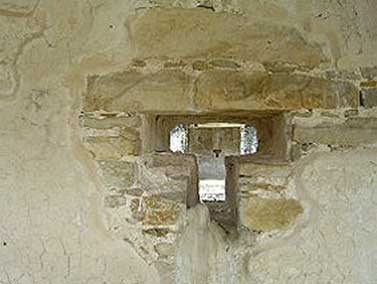 “A transcendental synthesis of human religious experience is inherent in the word te, Sacred Tree, which emerged from the words teol and teotl the names of God the Creator in Mayan and Nahuatl. These most revered and sacred words of the ancient people, symbolized by the Sacred Tree, were represented in the Mayan hieroglyphs as the symbol ‘T.’ Additionally, this symbol represented the air, the wind, the divine breath of God.” (1)

In other words, the T-shaped doorway or window symbolizes the Sacred Tree at the Center of the World (axis mundi) upon which the shaman’s spirit may climb. In addition, it functions as the portal leading to the Great Spirit, through which the breath of life may pass. 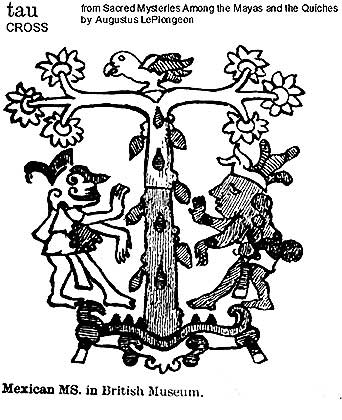 Breast-like fruit growing from the trunk of the sacred yaxche tree. Bird as spirit messenger perched on top.
In numerous cultures tau was connected to abundant water or rain-deities. For instance, Augustus Le Plongeon, one of the first archaeologists of the Maya, writes that the T-shape corresponded to Crux, or the Southern Cross. This constellation appears shortly before the beginning of the rainy season in southern Mexico.

“The ancient Maya astronomers had observed that at a certain period of the year, at the beginning of our month of May, that owes its name to the goddess MAYA, the good dame, mother of the gods, the “Southern Cross,” appears perfectly perpendicular above the line of the horizon. This is why the Catholic church celebrates the feast of the exaltation of the holy cross on the third day of that month, which it has consecrated particularly to the Mother of God, the Good Lady, the virgin Ma-R-ia, or the goddess Isis anthropomorphized by Bishop Cyril of Alexandria.” (2)

Is it more than a coincidence that the name of this Mesoamerican tribe should be the same as the Sanskrit word for the veil of illusion? The Mother Goddess Shakti, otherwise known as the Divine Mother Devi, gives birth to all phenomenal forms that we mistakenly perceive as being real. Queen Maya was impregnated by a white elephant entering her side and subsequently gave birth to Siddhartha Gautama the Buddha.

Furthermore, Maia was the Greek goddess of spring and the Roman goddess of the earth or growth. Her fertility celebration is either the 1st or the 15th of May. She was also the eldest sister and the brightest star of the Pleiades. In the land of the Maya tribe, the sun in conjunction with the Pleiades passes through the zenith during the month of May. (3)

In Egypt the ankh, or ansate cross, was the “key to the Nile” by which Osiris, husband of Isis, accomplished his annual riparian inundations. The upper loop represents the womb, and the lower straight portion represents either the birth canal or the phallus. 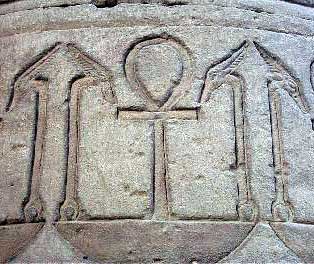 Ankh between two pairs of was scepters carved on temple wall, Egypt
It is interesting to note that when Moses entered the Sinai desert, he found the Midianite tribe (also called the Kenites) wearing the T-shape on their foreheads. This sign, which represented their god of storms (bringing water) and war (thunder), later became known as the “Yahweh Mark.”

Much later Jesus may well have been crucified on a Tau or St. Anthony’s cross instead of on the Latin cross we think of today, though this will probably be forever debated.

In his classic book Atlantis: the Antediluvian World, Ignatius Donnelly states that tau was an important icon signifying “hidden wisdom” for Mexicans as well as for Peruvians, Egyptians, Phoenicians, and Chaldeans. In general, it was emblematic of rejuvenation, freedom from physical suffering, hope, immortality, and divine unity.

Thus we have seen how many cultures associate the T-shape with burgeoning new life, the rising sun, psycho-spiritual journeying, and ultimate resurrection. Sometimes the simplest symbols contain the deepest meanings.

Excerpt from The Orion Zone: Ancient Star Cities of the American Southwest
Copyright © 2006 by Gary A. David. All rights reserved

Gary A. David is an independent researcher and writer living in northern Arizona. The Orion Zone: Ancient Star Cities of the American Southwest is now available from Adventures Unlimited Press. This book discusses a correlation between the stars of Orion and the Hopi villages and ruins in the Four Corners region of the US. Recently Mr. David’s articles have appeared in Atlantis Rising, Fate, and World Explorer magazines.
Email: islandhillsbooks@msn.com