The Twilight of the Gods - A story of the Fimbulwinter around 536 AD?

Nov 18, 2008 By Henrik Palmgren | redice.tv
This story of The Twilight of the Gods is probably describing the extreme climate change that took place around 536 AD following an impact of a comet or meteorite or possibly the explosion of the volcano Tambora in Sumbawa, Indonesia. Read more about this below. This idea spawns from the theory that the gods from mythological record actually is referring to planetary bodies. 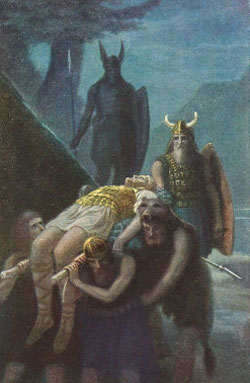 Although Loke was bound, and could do no more harm, Balder could not come back; and so Asgard was no longer the heaven it used to be. The gods were there, but the sunshine and the summer had somehow lost their glory, and were thenceforth pale and faint. At last there came a winter such as neither man nor god had ever seen before. The days were short and dark, blinding storms followed fast upon each other and left mountains of snow behind, fierce winds swept the sky and troubled the sea, and the bitter air froze the very hearts of men into sullen despair. The deepest rivers were fast bound, the fiercest animals died in their lairs, there was no warmth in the sun, and even the icy brightness of the stars was dimmed by drifting snow. The whole earth was buried in a winter so bitter that the gods shivered in Asgard.

The long nights and the short, dark days followed fast upon each other, and as the time drew near when summer would come again men's hearts grew light with hope once more. Each day they looked into the sullen skies, through which clouds of snow were whirling, and said to each other, "To-morrow the summer will come;" but when the morrow came no summer came with it. And all through the months that in other days had been beautiful with flowers the snow fell steadily, and the cold winds blew fiercely, while eyes grew sad and hearts heavy with waiting for a summer that did not come. And it never came again; for this was the terrible Fimbul-winter, long foretold, from which even the gods could not escape. In Jotunheim there was joy among the frost-giants as they shouted to each other through the howling storms, "The Fimbul-winter has come at last." At first men shuddered as they whispered, "Can it be the Fimbul-winter?" But when they knew it beyond all doubting a blind despair filled them, and they were reckless alike of good or evil. Over the whole earth war followed fast upon war, and everywhere there were wrangling and fighting and murder. It hardly snowed fast enough to cover the blood-stains. Mothers forgot to love their little children, and brothers struck each other down as if they were the bitterest enemies.

Three years passed without one breath of the warm south wind or the blossoming of a single flower, and three other years darker and colder succeeded them. A savage joy filled the hearts of the frost-giants, and they shook their clenched hands at Asgard as if they had mastered the gods at last. On the earth there was nothing but silence and despair, and among the gods only patient waiting for the end. One day, as the sun rose dim and cold, a deep howl echoed through the sky, and a great wolf sprang up from the underworld and leaped vainly after it. All day long, through the frosty air, that terrible cry was heard, and all day the giant wolf ran close behind, slowly gaining in the chase. At last, as the sun went down over the snow-covered mountains, the wolf, with a mighty spring, reached and devoured it. The glow upon the hills went out in blackness; it was the last sunset. Faint and colourless the moon rose, and another howl filled the heavens as a second wolf sprang upon her track, ran swiftly behind, and devoured her also. Then came an awful darkness over all as, one by one, the stars fell from heaven, and blackness and whirling snow wrapped all things in their folds. The end had come; the last great battle was to be fought; Ragnarok, the Twilight of the Gods, was at hand.

Suddenly a strange sound broke in upon the darkness and was heard throughout all the worlds; on a lofty height the eagle Egder struck his prophetic harp. The earth shook, mountains crumbled, rocks were rent, and all fetters were broken. Loke shook off his chains and rushed out of his cavern, his heart hot with hate and burning with revenge, the terrible Fenris-wolf broke loose, and out of the deep sea the Midgard-serpent drew his long folds toward the land, lashing the water into foam as he passed. From every quarter the enemies of the gods gathered for the last great battle on the plain of Vigrid, which was a hundred miles wide on each side. Thither came the Fenris-wolf, his hungry jaws stretched so far apart that they reached from earth to heaven; the Midgard-serpent, with fiery eyes and pouring out floods of venom; the awful host of Hel with Loke at their head; the grim ranks of the frost-giants marching behind Hrym; and, last of all, the glittering fire-giants of Muspelheim, the fire-world, with Surt at the front.

The long line of enemies already stretched across the plain when Heimdal, standing on the rainbow bridge, blew the Gjallar-horn to call the gods. No sooner had Odin heard the terrible call to arms than he mounted and rode swiftly to Mimer's fountain, that he might know how to lead the gods into battle. When he came, the Norns sat veiled beneath the tree, silent and idle, for their work was done, and Ygdrasil began to quiver as if its very roots had been loosened. What Odin said to Mimer no one will ever know. He had no sooner finished speaking than Heimdal blew a second blast, and out of Asgard the gods rode forth to the last great battle, the golden helmet and shining armour of Odin leading the way. There was a momentary hush as the two armies confronted each other, and then the awful fight began. Shouts of rage rose from the frost-giants, and the armour of the fire-giants fairly broke into blaze as they rushed forward. The Fenris-wolf howled wildly, the hosts of Hel grew dark and horrible with rage, and the Midgard-serpent coiled its scaly length to strike. But before a blow had been struck the shining forms of the gods were seen advancing, and their battle-cry rang strong and clear across the field. Odin and Thor started side by side, but were soon separated. Odin sprang upon the wolf, and after a terrible struggle was devoured. Thor singled out his old enemy, the Midgard-serpent, and in a furious combat slew him; but as the monster died it drew its folds together with a mighty effort and poured upon Thor such a deadly flood of venom that he fell back nine paces, sank down and died. Frey encountered Surt, and because he had not the sword he had given long before to Skirner, could not defend himself, and he too was slain. The dog Garm rushed upon Tyr, the sword-god, and both were killed, Tyr missing the arm which he lost when the Fenris-wolf was bound. 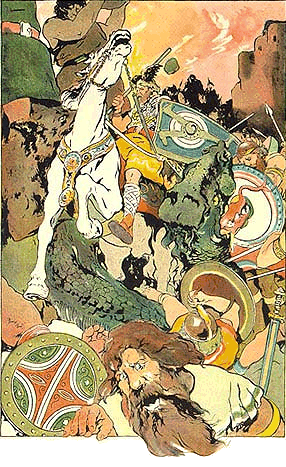 Then the awful fight began

And now the battle was at its height, and over the whole field gods, monsters, and giants were fighting with the energy of despair. Heimdal and Loke met, struggled, and fell together, and Vidar rushed upon the wolf which had devoured Odin, and tore him limb from limb. Then Surt strode into the middle of the armies, and in an awful pause flung a flaming firebrand among the worlds. There was a breathless hush, a sudden rush of air, a deadly heat, and the whole universe burst into blaze. A roaring flame filled all space and devoured all worlds, Ygdrasil fell in ashes, the earth sank beneath the sea. No sun, no moon, no stars, no earth, no Asgard, no Hel, no Jotunheim; gods, giants, monsters, and men all dead! Nothing remained but a vast abyss filled with the moaning seas, and brooded over by a pale, colourless light. Ragnarok, the end of all things, the Twilight of the Gods, had come. 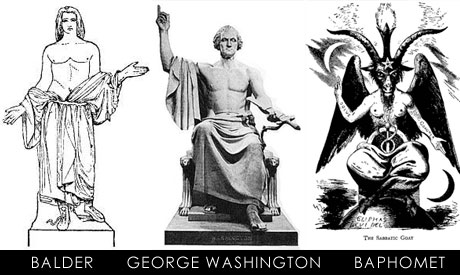 In the first paragraph it says: "Balder could not come back". This could simply refer to the Sun. The Sun could not come back. Balder is known as the "Shining One" the “Bright One” – a sun god. See the above similarity between the rendition of Baldur, Statue of George Washington and Eliphas Levi’s Baphomet. There is also an etymological connection between Baldur and the Canaanite god Baal, the Druidic Belenus, the welsh Beli Mawr and the Gaulish Belenos, all "shining" gods (sun gods).

In Norse mythology, Fimbulwinter (Old Norse Fimbulvetr) is the immediate prelude to the events of Ragnarök. Fimbulwinter is three successive winters where snow comes in from all directions, without any intervening summer. During this time, there will be innumerable wars and brothers will kill brothers.

The prefix 'fimbul' means "the great/big" so the correct interpretation of the word is "the great winter".

In Denmark, Norway, Sweden and other Nordic countries, the term fimbulvinter is also used to refer to an unusually cold and harsh winter.

The extreme weather events of 535-536 were one of the most severe and protracted short-term episodes of cooling in the Northern Hemisphere in the last 2,000 years. The event is thought to have been caused by an extensive atmospheric dust veil, most likely resulting from a large volcanic eruption in the tropics though the exact location remains unknown. Its effects were widespread, causing unseasonal weather, crop failures and famines worldwide.

The Byzantine historian Procopius recorded of 536, in his report on the wars with the Vandals, "during this year a most dread portent took place. For the sun gave forth its light without brightness… and it seemed exceedingly like the sun in eclipse, for the beams it shed were not clear."

Low temperatures, even snow during the summer (snow reportedly fell in August in China, which postponed the harvest there)
Crop failures
"A dense, dry fog" in the Mideast, China, and Europe
Drought in Peru, which affected the Moche culture

Take a look at the related links to further explore the topic of Doomsday, Mythology and the relationship to planets and catastrophe in space.