Thinking So Much About Thinking

May 14, 2012 Source: nytimes.com
WHY are we thinking so much about thinking these days? 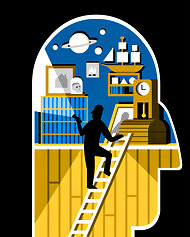 Unlike most pop self-help books, these are about life as we know it — the one you can change, but only a little, and with a ton of work. Professor Kahneman, who won the Nobel Prize in economic science a decade ago, has synthesized a lifetime’s research in neurobiology, economics and psychology. “Thinking, Fast and Slow” goes to the heart of the matter: How aware are we of the invisible forces of brain chemistry, social cues and temperament that determine how we think and act? Has the concept of free will gone out the window?

These books possess a unifying theme: The choices we make in day-to-day life are prompted by impulses lodged deep within the nervous system. Not only are we not masters of our fate; we are captives of biological determinism. Once we enter the portals of the strange neuronal world known as the brain, we discover that — to put the matter plainly — we have no idea what we’re doing.

Professor Kahneman breaks down the way we process information into two modes of thinking: System 1 is intuitive, System 2 is logical. System 1 “operates automatically and quickly, with little or no effort and no sense of voluntary control.” We react to faces that we perceive as angry faster than to “happy” faces because they contain a greater possibility of danger. System 2 “allocates attention to the effortful mental activities that demand it, including complex computations.” It makes decisions — or thinks it does. We don’t notice when a person dressed in a gorilla suit appears in a film of two teams passing basketballs if we’ve been assigned the job of counting how many times one team passes the ball. We “normalize” irrational data either by organizing it to fit a made-up narrative or by ignoring it altogether.

The effect of these “cognitive biases” can be unsettling: A study of judges in Israel revealed that 65 percent of requests for parole were granted after meals, dropping steadily to zero until the judges’ “next feeding.” “Thinking, Fast and Slow” isn’t prescriptive. Professor Kahneman shows us how our minds work, not how to fiddle with what Gilbert Ryle called the ghost in the machine.

“The Power of Habit” is more proactive. Mr. Duhigg’s thesis is that we can’t change our habits, we can only acquire new ones. Alcoholics can’t stop drinking through willpower alone: they need to alter behavior — going to A.A. meetings instead of bars, for instance — that triggers the impulse to drink. “You have to keep the same cues and rewards as before, and feed the craving by inserting a new routine.”

Read the full article, "The Amygdala Made Me Do It" at: nytimes.com