This Pocket-Friendly Machine Signs Your Name for You, Costs $365,000

Whether you’re a celebrity or a famous author who spends a lot of time giving autographs, or just a busy businessman who doesn’t have time to sign mountains of documents, you can now spend $365,000 on a state of the art Signing Machine, and it’ll do it for you.

I bet you didn’t even know portable signing machines existed, did you? Well, technically they didn’t, until recently. Swiss watchmaker Jaquet Droz finally unveiled its impressive Signing Machine last month, at the Baselworld Watch Show, after reportedly working on it for the last four years. It showcases the company’s mechanical clockwork technology, only instead of doing it by accurately telling time, it replicates your signature to perfection.

So how does a Signing Machine work? Well, the one created by Jaquet Droz features a retractable metal arm that comes with a slot for a pen. You just place it in there, wind the machine up, and the 585 different parts inside will guide the pen to create your signature on pretty much anything you need. But in order for this to work, the user must provide their signature to the company, so that they can incorporate it into the design while building the machine.

The Signing Machine was apparently inspired by The Writer and The Draughtsman, two pen-holding automatons built by Pierre Jaquet Droz and his son, Henri-Louis, in the late 1700s, to promote their watches. The Writer, could also guide a pen on paper, but the company claims that the mechanism for the newer Signing Machine has been “reworked for fluidity, carrying out perfect, more consistent signatures” than the old automaton could. 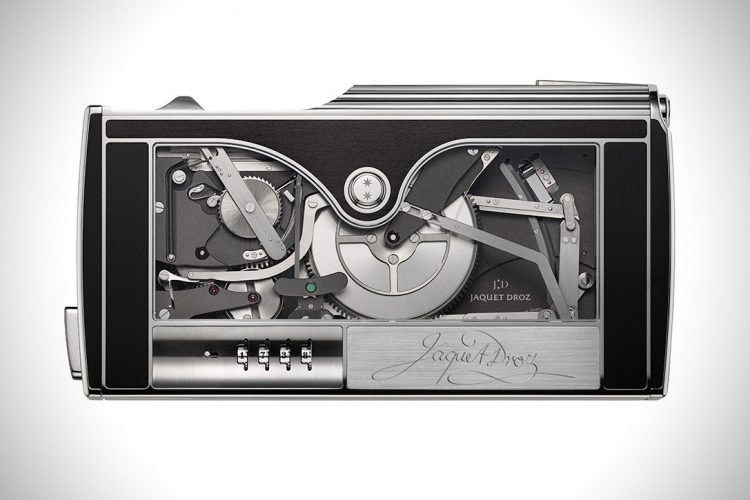 But what happens if you somehow misplace this small Signing Machine, or if it gets stolen? Someone could theoretically use it to sign your life away. Don’t worry, though, as Jaquet Droz claims that the machine can only be activated by a code chosen by the owner.

This definitely seems like an interesting gadget to have, but the price tag is sure to keep everyone but the ultra-rich from even considering buying it. Owning your very own fully mechanical Signing Machine will set you back a whopping $365,000.