Nov 22, 2011 Source: srjarchives.tripod.com
Jefferson may not have been a card-carrying Mason, but his philosophy and actions certainly paralleled Masonic ideals and practices. 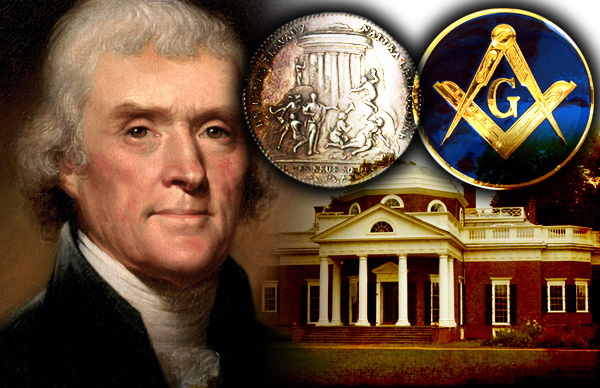 Was Thomas Jefferson a Freemason? This question has been asked by Masons and others and not conclusively answered for 200 years. In 1960, Brother William R. Denslow, Masonic scholar and editor of the Transactions of the Missouri Lodge of Research, concluded that Jefferson was not a Mason, saying all claims for his membership are based on association or insinuation, with no proof by records.

Brother Denslow showed that Jefferson was reported by Dr. Joseph Guillotin to have attended meetings of the Lodge of Nine Muses in Paris; that he had marched in a Masonic procession with Widow’s Son Lodge No. 60 and Charlottesville Lodge No. 90 on October 6, 1817, at the cornerstone laying of Central College (now the University of Virginia); that the Grand Lodges of South Carolina and Louisiana held funeral orations and processions for him following his death on July 4, 1826; and that a Blue Lodge at Surry Court House, Virginia, was named Jefferson Lodge No. 65 in 1801.

The many details of Jefferson’s public and private life, as well as all facets of his philosophy, have been thoroughly explored. Preserved and now available for examination are over 25,000 letters from his friends and acquaintances as well as 18,000 copies of his own letters and records. The latter were made with letter presses and polygraph machines of Jefferson’s own invention. The Princeton University book The Papers of Thomas Jefferson, now in 24 volumes, covers letters and records for the years 1760 to 1792. The indexes to those volumes, which report details of personal expenditures, daily activities, meetings attended, and friends and associates contacted, show no reference to Freemasonry.

Dumas Malone in his six-volume biography of Jefferson has only one Masonic reference. He reported the Central College cornerstone laying, saying that President Monroe officiated, five visitors (including Presidents Madison and Jefferson) were present, the local Fraternity of Freemasons participated, and a large crowd attended. Still, all of Jefferson’s biographers have considered him an elusive paradox whose private and real nature may not yet have been penetrated.

Malone said that Jefferson was a half-dozen men rolled into one. He was known to his contemporaries as an apostle of Freedom, disciple of Enlightenment, searcher for Knowledge, pursuer of Wisdom through Reason, patron of Education and the Arts, Master Builder and Architect. He believed in God the Creator, and he was the opponent of any union of Church and State. Jefferson may not have been a card-carrying Mason, but his philosophy and actions certainly paralleled Masonic ideals and practices.

Jefferson directed that his own epitaph should be limited to the recitation of what he considered his three most important achievements. The stone obelisk marking his grave at Monticello is inscribed: “Here was buried Thomas Jefferson, Author of the Declaration of American Independence, of the Statute of Virginia for religious freedom and Father of the University of Virginia.” 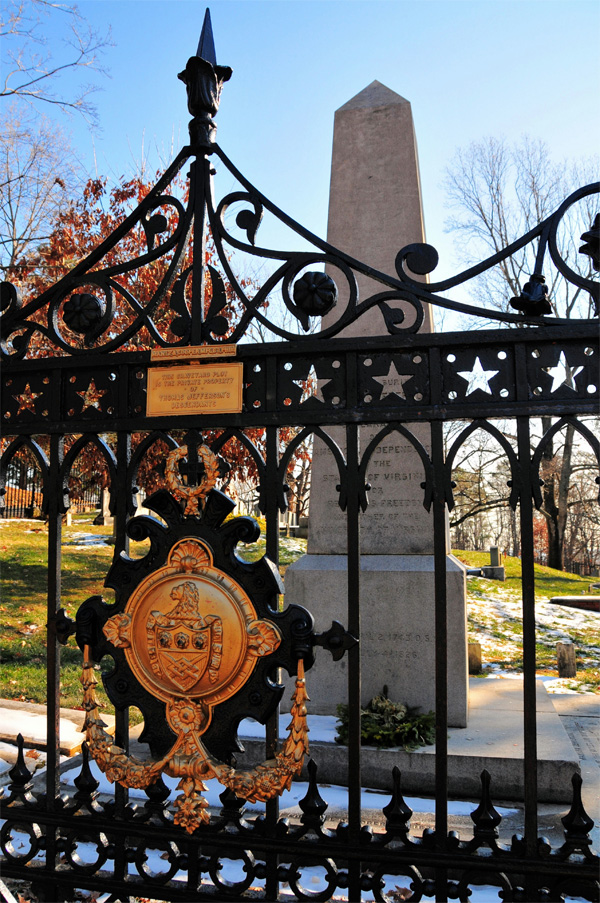 Freedom was the keystone of Jefferson’s philosophy and the goal of his life. His three most satisfying accomplishments were organically related. To him the independence of a nation could not be separated from the independence of its citizens. Religious freedom was a vital part of the structure of a free society, and Church and State had separate functions. They should always be separate and free from the authority and possible tyranny of each other. Education was necessary for the growth of free minds in a free society. Knowledge should be acquired through public free education. In other words, Jefferson personified the same freedom as is integrated in Freemasonry.

The Enlightenment was the philosophic movement born and nurtured in Europe in the 18th century, principally in France under the guidance of Voltaire. It was characterized by a questioning by reason of authority in politics and religion. It spread an empirical search for truth and light into science, the arts, literature, and education. It called for changes and reforms precursive to the American and French Revolutions.

Freemasons in England and France were acknowledged leaders of the Enlightenment. The famous historians Will and Ariel Durant (in Rousseau and Revolution page 938 of volume ten in their epic series The Story of Civilization) reported that in 1789 there were 629 Masonic Lodges in Paris, each with 50 to 100 members. Voltaire was made a Mason without preliminary preparation in the Lodge of Nine Muses on April 7, 1778. The philosopher and writer was welcomed among the Brothers with the assurance that he had long fulfilled the obligations of a Freemason before his promises to keep them. Among followers of Voltaire and the searchers for more Light in America were Brothers Washington, Franklin, and their associate, Thomas Jefferson.

Jefferson was committed to reason, natural law, and the inherent equal rights of man. He had faith in human beings and in the human mind. He believed only an enlightened society could govern itself and ignorant people could not maintain their God-given freedom. He believed knowledge was a prerequisite to wisdom and to a proper exercise of those rights. To him knowl- edge was power, safety and happiness, and the search for knowledge must be continually pursued. He was an avid reader and collector, and his accumulation of knowledge was in his vocations as lawyer, legislator, diplomat, and executive, and also in his avocations as farmer, architect, builder, philosopher, and scientist.

The superb library of the “Sage of Monticello” had 6,487 books by 1814 when those volumes were sold for $23,950 to constitute the Library of Congress in replacing the small library which had been destroyed by the British in 1812. Another 1,000 volumes, acquired by Jefferson in 1826, were bequeathed by him to the University of Virginia. Specimens of minerals, flora, fauna, and Indian cultures of the West, which had been returned by Masonic Brothers Lewis and Clark in 1806, were displayed at Monticello.

Public education was vital to Jefferson’s ideas of truly republican government. In 1788 he first proposed a plan for free public grammar school education to the Virginia legislature. This was not enacted into law until 1796, but it still was the pioneer effort in America. He wanted a statewide general system of education to include a new university to teach sciences, languages, law and philosophy, with emphasis on scholastic freedom and academic excellence.

The university at Charlottesville resulted from his personal leadership in lobbying the legislature, raising funds, recruiting faculty, selecting curriculum, locating the proper site, and drawing the plans for the school’s rotunda and library, 7 classroom pavilions, and 37 dormitories. He was a visitor of the school from 1819 until his death, and he was without question the “Father of the University of Virginia.”

Jefferson has been referred to as America’s first great native-born architect. He made working drawings as well as architectural designs. Over the years from 1767 on, he produced 200 drawings, sketches, and surveys for building, rebuilding, and renovating Monticello. He also designed the entire academic village at the University of Virginia which was, in 1976, voted by the American Institute of Architects as “the proudest achievement of American architecture in the past 200 years.” Designing and building were creative and satisfying works of beauty and art to Jefferson in a way only a Freemason can understand.

Jefferson expressed his firm belief in God in his writings. God is Creator and Nature’s God in the Declaration of Independence. In 1786, the Virginia Act Establishing Religious Freedom underlined the fact that Almighty God created the mind free. The letters to John Adams and the English scientist and theologian Joseph Priestley clearly showed Jefferson’s conviction that church and state must be separate, his opposition to creeds and dogma, and his insistence on tolerance and mutual respect among religions. In 1816, he authored The Life and Morals of Jesus. He would have heartily accepted the Masonic requirement of faith in the Great Architect of the Universe.

Thomas Jefferson may not have been a Brother in a Lodge of Freemasons, but he had all of the prerequisites for membership in the Craft. His life could serve as a role model for all Masons; and, like Voltaire, he fulfilled the obligations of our Fraternity. First and foremost, he was a Freeman.

William Henry - The Apotheosis of George Washington, Freedom’s Gate & Stargates around the World