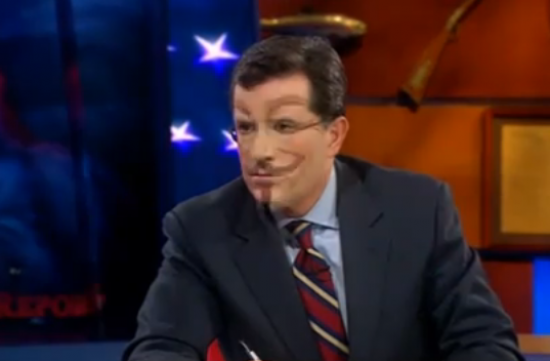 All the conspiracy folk out there should love this one: a few nights ago, Stephen Colbert had Glenn Greenwald on to discuss the showdown between security firm HBGary and the Wikileaks-supporting internet ’vigilante’ hacking group Anonymous which has been making news of late. Towards the end of the interview, keen-eyed viewers may have picked up a little ’video glitch’ - and if they were interested enough, they may have investigated further and found this ’subliminal’ one-frame overlay on top of Colbert’s face:

Yes that’s right - Colbert has a Guy Fawkes mask graphic over his face, a symbol intimately associated with ’Anonymous’, derived from the Alan Moore comic series ’V for Vendetta’.

So, how did it come to be there? Just typical Colbert humour, coming as it does while Greenwald discusses the power of ’Anonymous’? Given how quick it is, that humour would have to have been meant for later analysis by the geek audience, given that broadcast audiences wouldn’t have picked up on it at air-time. So perhaps some comedy mixed with a nice publicity stunt? Maybe Colbert was signaling his personal support for the group? Or, was Colbert punk’d, either by someone in post-production, or by an external hack?

Stephen Colbert dedicated the first portion of his show last night to a nefarious breach of security at the Report -- when an image of Guy Fawkes (i.e. the masked dude from "V for Vendetta") was super-imposed over his face during a broadcast last week. Colbert blamed the intrusion on the hacker collective Anonymous, a shadowy organization who also targeted Americans for Prosperity, the political action group headed by the Koch brothers. To Anonymous, Stephen said:

"Lay off Americans for Prosperity. If you’ve got a problem with the Koch brothers, go after them the democratic way -- by funneling millions of dollars into a front organization to launch attack ads against teachers."