Jan 7, 2014 Source: sg.news.yahoo.com
Some 2,000 years ago, elite Roman families stuffed their closets with wax masks made in the likeness of their male ancestors so that during funeral processions actors could fill in for the missing links of the genealogical line.

Scholars know about the strange practice from ancient sources, such as the Greek historian Polybius, though none of the masks themselves survive.

Recently, however, a team of researchers at Cornell University made life-cast molds of their own faces to recreate these imagines maiorum, and they found that the wax masks were indeed uncannily lifelike.

The group’s work was presented here at the annual meeting of the Archaeological Institute of America this past weekend. 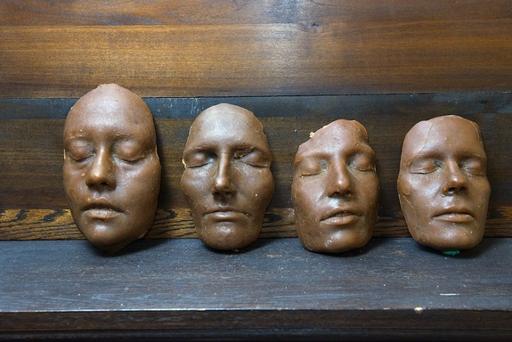 "I will tell you that I felt awful — simply awful — watching my friend’s face melting in the Crock-Pot," said doctoral student Katherine Jarriel.

With a limited wax supply, Jarriel had to melt down a botched mask she made of her colleague Carrie Fulton’s face, she explained to LiveScience. Her visceral reaction brought home the idea that Romans might have felt very emotionally attached to these ancestor masks, which would have been cast while the men were still living.

"After all, these were potentially masks of people they had known being brought back to life through re-enactment in funeral processions," Jarriel wrote in an email.

As the experimenters can attest, wax is a rather sensitive and unstable material. The mockup masks, which were made with a modern recreation of ancient beeswax, have been sitting inside a protected display case at Cornell. But even after a short time, the surface of the skin appears to have tiny pits and holes, Jarriel said.

In Roman times, the masks would have been constantly discolored and degraded by candle flames and smoke as well as the occasional handling during funeral processions and the copying process. (New households forged by marriage needed their own sets of ancestor masks.)

Wax also has quite lifelike properties, and in some ways could be a stand-in for the human body, Alexandridis noted. In ancient times it was used to close wounds and archaeologists have at least one example of a wax sculpture of a man’s head used to replace his decapitated one in his tomb.

Read the full article at: news.yahoo.com
READ: Black Death: Did the plague help finish off the Romans?