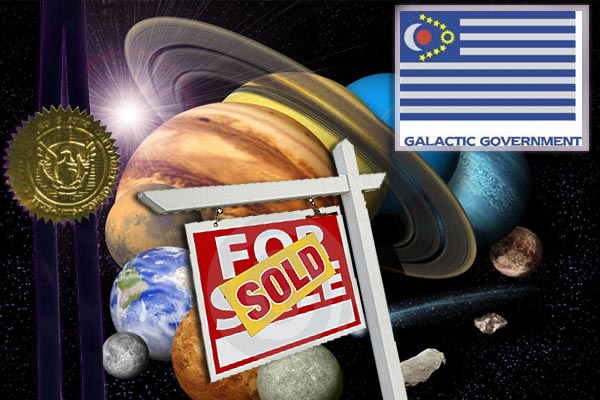 The United States Secretary of State, Hillary Clinton verified the sovereignty of The Galactic Government and businesses organized under the Galactic Business Corporations Act of 2005 on Dec. 8, 2009.

The signed document includes The Declaration of Galactic Independence, The Constitution of the Galactic Government and The Galactic Business Corporations Act of 2005.

A copy of the signed document with Secretary of State Hillary Clinton’s verification [is] available at http://www.galacticgovernment.info/USRecGG.pdf.

The citizens of the Galactic Government ratified the formation of the current pro tem and the structure of the full government in April of 2004 and diplomatic out-reach began shortly there after.

“We have been in contact with several dozen countries around the world,” states Galactic Government Secretary of State Vincent Hamm, “and though interest in opening diplomatic relations with our government appears high, the diplomatic process can be slow. We are hopeful that, with the United States recognizing us, that other countries will be contacting us to solidify diplomatic ties.”

The primary architect of the agreement, Attorney General Wes Faires says: “It is an honor to be part of the Galactic Government and to have been instrumental in validating all we stand for.”

Negotiations are commencing with the United Nations. 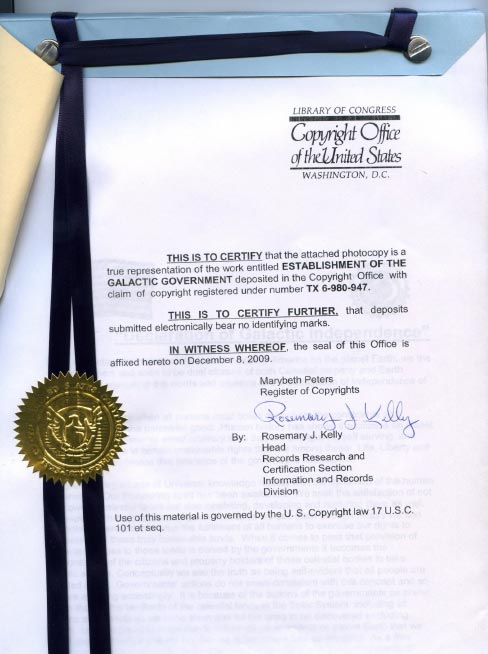 Declaration of Galactic Independence"
"While respecting the history of the United States of America on the planet Earth, we the
property owners and soon to be dual citizens of both Celestial property and Earth
countries, do appreciate the words and essence of the Declaration of Independence of
1776.
There comes a time when all persons must break away from the constraints and
misconceptions of the perceived good. Human history has shown the citizens on planet
Earth when governments enact arbitrary laws that are ambiguous, self serving, and
counter productive to certain unalienable rights that are among these: Life, Liberty and
the Pursuit of Happiness that tolerance of the governed is abandoned.

We are entering an age of Universal knowledge replete with the dynamics of the human
experience. Our Pioneering spirit has been awakened. We seek the satisfaction of not
only owning celestial lands but also inhabiting, developing and nurturing them as well.
In keeping with the traditions of governments as we see them through history we find
boundless intervention to stop the fulfillment of all humans to exercise our rights to
possession of these truly inalienable lands. When it comes to pass that provision of
expected access to those lands is denied by the governments it becomes the
responsibility of the citizens and property holders of those celestial bodies to take
drastic actions. Conceptually we see the truth as being self-evident that all people are
created equal. Governments’ actions do not seem consistent with this concept and so
we are adapting accordingly.

It is because of the actions of the governments on planet
Earth that we the landlords of the celestial lands in the Solar System including all
moons and planets as we know them and for the ones to be discovered excluding
Earth, take the peaceful resolution to inform all governments on planet Earth that we
have democratically achieved our resolve to become a free sovereignty. As a free
sovereignty it is our desire to create a working relationship with the governments of
planet Earth so foundations and mutual respect might be achieved early in our growth. If
it were not for the decades of historic records showing the monumental steps made in
support of human rights by the Earth governments we recognize that we would have
little chance to succeed with our quest. It is because of the lessons learned from the
Earth governments that we are capable of rational expectations that we will succeed in
our bid for sovereignty.

We, the Human Beings and celestial property owners on the planet Earth, do hereby
declare our intention to become self ruling, so that we might venture forth to find a new
combined destiny of self promotion and colonization."

Interesting clauses of note found within "The Constitution of the Galactic Government":

Article. I.
Section 1.
All legislative Powers herein granted shall be vested in a Congress of the Galactic Government located
within New Hope City, Sea of Tranquility, Moon of Earth, as well as some areas on the planet Earth, which
shall consist of a Senate and House of Representatives.

Clause 6: Until the population of 25,000 inhabitants has been achieved for a specific state, representatives may reside on Earth as well as their respective state.

Clause 4: Taxation of citizenry by the Galactic Government shall never be imposed unless for the immediate raising of funds to provide security and major problem resolution to the citizenry and in any case may never rise above a 5% flat rate on all citizenry and as a percentage all citizenry will pay the same flat rate. Individual states within the union may not set taxation rates on citizens above a 5% flat rate for all citizens and no citizen shall be required to pay a greater than 10% cumulative rate to all levels of
government. Restrictions of two years are set in place for these taxable times. At the end of the conflict or problems solved the tax base will be repealed to 0% until next needed. This clause shall never be
changed or infringed upon.

Clause 2: To borrow Money on the credit of the Galactic Government;

Clause 13: To provide and maintain a Galactic Guard;

Clause 14: To make Rules for the Government and Regulation of the land and space Forces;

Clause 15: To provide for calling forth the Legions to execute the Laws of the Union, suppress Insurrections and repel Invasions;

(There is much, much more information to be gleaned from the large, 102 page document pertaining to the now fully recognized, lawfully binding, rights and entitlements of the Galactic Government. PDF)

Ted Twietmeyer - What NASA isn't Telling you about Mars