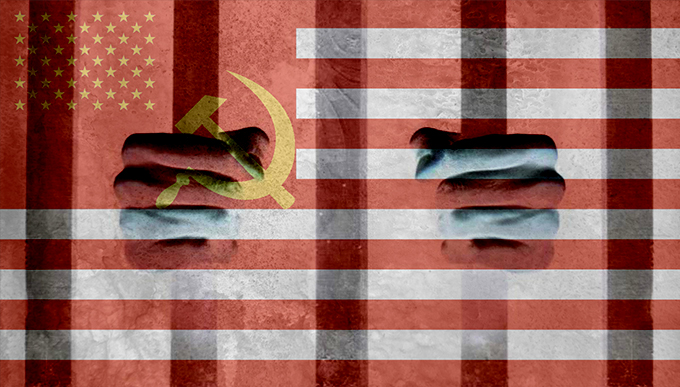 For decades, the Soviet Gulags under Joseph Stalin had been considered some of the worst prisons in all of history. But now things have changed.

The United States has far exceeded the horrific tolls of the gulags. In the Soviet example, there were more than 18 million victims during the gulags’ use over four decades.

Around a million people died in the gulags over the years.

Now, as of 2009, the United States tolls soar higher than 7 million in prison, on probation or in some way caught up in the American prison system.

On the surface that might sound like a lot less than the gulag total above. But when you factor in all who have been put through the US prison system, we find a total that is higher than 19 million. That’s more than the 18 million locked up in the gulag system over those forty years.

Just like the Soviet Gulag System, the American Prison-For-Profit industry sells itself with the pitch that it is about “rehabilitation.” The government even has the audacity to call the prison system the “U.S. Department of Corrections.”

In the former Soviet Union, they called this vospitaniye and perevospitaniye, meaning essentially: “re-education.”

Oddly, however, in the Soviet gulags, prisoners were forced to learn the arts – playing in orchestras and the like. In the United States Gulags, prisoners are forced to make uniforms for McDonald’s and Applebees, or to harvest produce for Whole Foods.

The private prison companies, well-known for profiting off of incarceration and crime, is now saying that the state’s they have contracted with aren’t keeping up their end of the bargain. The private prisons rely on a certain number of inmates for free and virtually-free slave labor.

That labor is used for a variety of trades, including making uniforms for popular restaurants like McDonalds and Applebee’s. But if the private prisons don’t have enough inmates locked up then production goes down correlative with the decrease in free labor (i.e. slavery).

It comes as a surprise to many Americans, but slavery was never actually abolished in the United States. That’s not a metaphor, it’s a matter of careful reading of the 13th amendment to the Constitution. That amendment – often lauded for abolishing slavery – actually makes an exception for prisons. Slavery is still completely legal as “punishment for a crime.”

Ratified at the end of the Civil War, the amendment abolished slavery, with one critical exception: Slavery and involuntary servitude actually remain lawful “as a punishment for crime whereof the party shall have been duly convicted.” In other words, according to this so-called punishment clause, if you get pulled over with the wrong controlled substance in your trunk, there’s nothing in the 13th Amendment to ensure you can’t be considered a slave of the state.

The punishment clause was taken directly from the Northwest Ordinance of 1787 and reflected the belief of the time that hard work was essential to prisoners’ moral rehabilitation. But the language was also ambiguous enough to be grossly abused. Soon, the clause was being used to reinstitute slavery under another guise.

Consider that there are more African Americans behind bars today than there were enslaved at any given time in American history and it becomes clear how corporations got their “work around” to keep slavery 100% legal. This is nothing new. This is the way it has been since slavery was supposedly abolished.

Now, the private prison industries say the government isn’t keeping up their end contracts for this slave labor.

California guarantees that prisons will be filled to 70% capacity at all times. Arizona promises almost 100% occupancy.

With crime dropping, the private prison industry is losing money and they are none too pleased.