Vikings Who Were The Vikings Ep 1 HD by limoslight


Vikings End Of The Viking Age Ep 3 HD by limoslight

Overall interesting documentary about the Vikings. There are a few major omission however. Nowhere in the documentary is the immensely important area of Götaland discussed or mentioned. Despite Neil Oliver’s quest in the first episode to find the root culture that gave rise to the what later became the Vikings, he fails to recognize the importance of Götaland (Västra Götaland in particular). 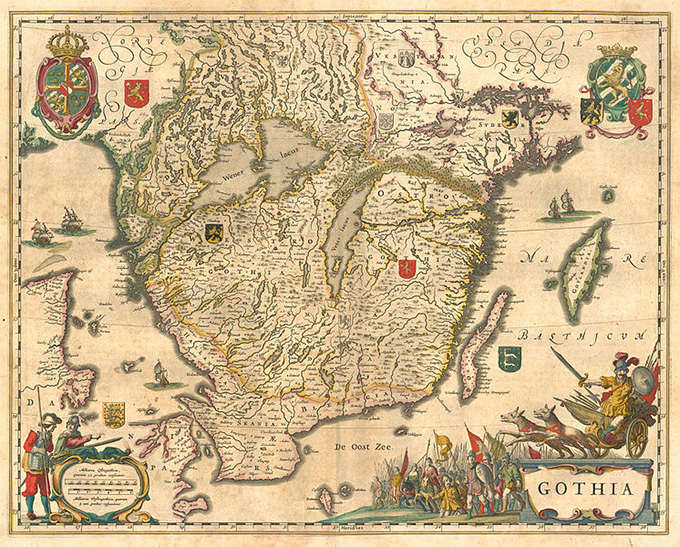 He’s correct to assert that the Vikings didn’t spring up over night, in fact there are plenty of written sources that discuss several different cultures/peoples, so why there is no mention of any of these are disappointing.

In accordance with the more "Stockholmcentric view," he does bring up the Vendel and the Vendel Era, but he does not reference or recognize there there are many accounts of Geates and Swedes fighting many battles over the power to control the land. This is also shown on the Sparlösa Runestone.

There was a major Battle on the Ice of Lake Vänern that is said to have taken place around 530 AD. This is well before the Viking age. Later there was also the Battle of Bråvalla at around 750. Both of these were between Swedes and Geats (Goths). These battles are almost 200 years apart, even the latter one in Bråvalla is 40 - 50 years before the first recognized Viking attack on Lindisfarne in England, in 793.

This shows that there were two major power centers in what today is Sweden. One was the Götar in Götaland and the other was Svear in Sweden (Svitjod). 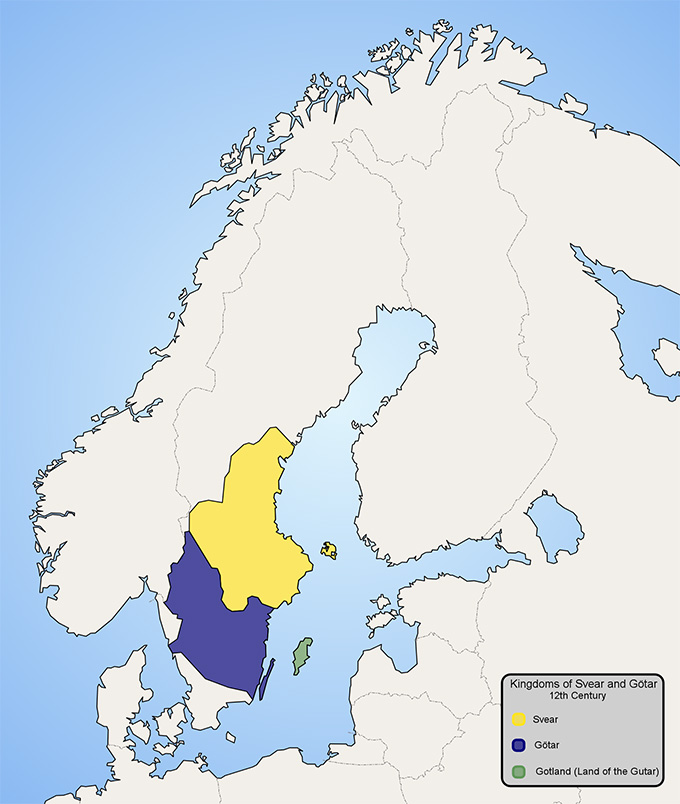 In the documentary we can see that Neil travels basically in a triangle from Oslo (and Bergen) in Norway, to Copenhagen in Denmark and finally to Stockholm in Sweden, basically avoiding the very heart of Scandinavia: Götaland. Not to be confused here with the island Gotland (land of the Gutar), to the East of Götaland. 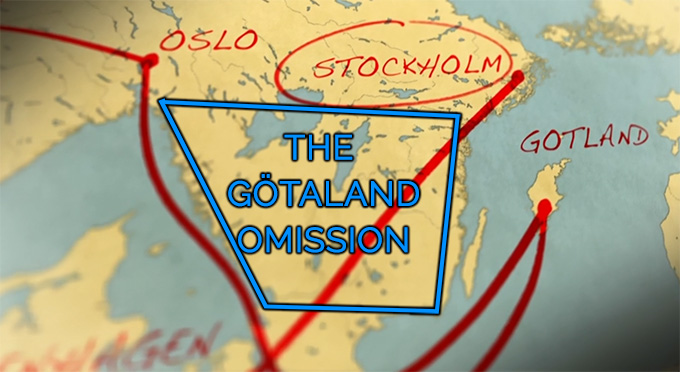 Despite that we know quite a bit about the Geats (the Goths) from the epic poem of Beowulf ( a Geat himself), this is not mentioned as one of the predecessors to the Vikings. Why?

It’s from Götaland that emigration took place hundreds of years before the Vikings went on their raids and trade missions. The Goths migrated south and later split forming the West Goths (Visigoths) and East Goths (Ostrogoths). As we know the Visigoths played a major part in sacking Rome, a fact that any descendant today should be very proud off.

This blatant omission is something that we see mimicked in many Swedish produced documentaries about the history of Sweden as well. They focus all on the Swedes (the Suiones) but never (I mean ever) make mention of Götar/gautar (the Goths).

In fact, even up to the prior King of Sweden Gustaf VI Adolfs death in 1973 during the innaguration speech, the incoming King had to declare that he not only became the king of Sweden, but also of the Goths and the Wends.

The full titles was: "Sveriges, Götes och Vendes konung." When Carl XVI Gustaf (the current "king" of Sweden) was appointed, the two latter titles was dropped.

It shows that there is a deep rooted rivalry that runs back into our history.

The Swedes were called Sueones (or Svitjod) and they are mentioned by Tacitus, in his Germania from 98 CE, with the spelling Suiones.

Then there are the others, written about by Jordanes in his "De origine actibusque Getarum" (The Origin and Deeds of the Getae/Goths), or the "Getica", that goes discussed to great extent the Goths, who they were, where they came and what they accomplished.

This also bears major similarities with the story of the Gutasaga, which tells of an emigration, that is associated with the historical migration of the Goths from Scandinavia during the Migration period.

The point here is that there was once a powerful seat of kings in Götaland. There are many historical clues that points towards this as well. For example, Sweden’s oldest law document is the Västgötalagen (Westrogothic law).

A contemporarily current list of Christian Swedish kings, added as an appendix to the oldest manuscript of "Äldre Västgötalagen", (Older Westrogothic law) was written by a priest called Laurentius in Vedum (Västra Götaland County) around 1325.

The king listed in this document begins with Olof Skötkonung (c. 980–1022). He was the first ruler documented to have been accepted both by the Svear around Lake Mälaren and by the Götar around Lake Vättern. However Olof was baptised in Husaby (Västra Götaland County), probably by the missionary Sigfrid, c.1008 at the Husaby church. 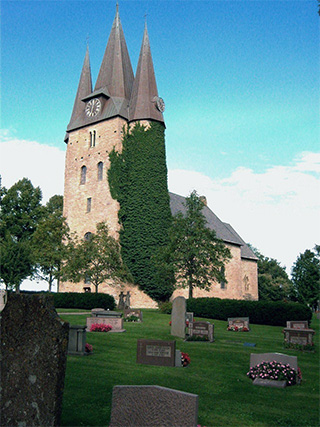 The King is buried in an above-ground sarcophagus at Husaby 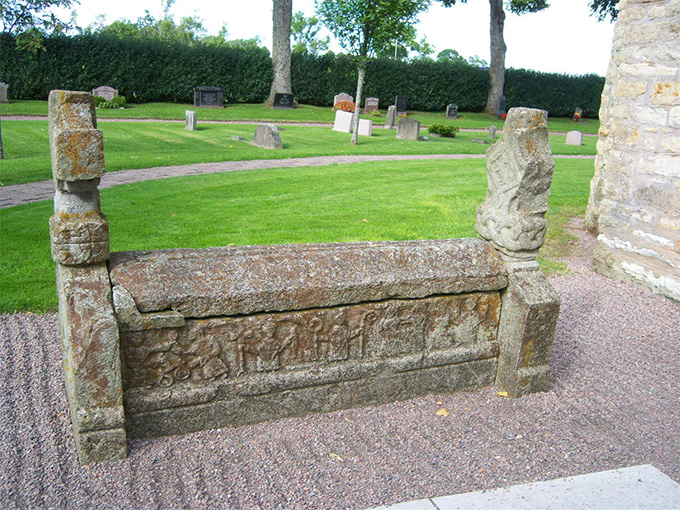 More photos and stories from Husaby and King Olof here.

Worth noting is also that this church is very close to the ancient and important ridge Kinnekulle that is on the eastern shore of lake Vänern. This ridge is an immensely important site that has not been investigate properly. There might literally be hundreds of finds from the stoneage and onwards, in this area. If the will, monetary means and permission (the biggest hurdle) existed to truly investigate this area, there is no telling what could be found.

Not far from Varnhem is the strange and powerful Passage grave Ekornavallen. It might be over 5000 years old.

We visited there a year ago:

There are a number of other people that have been associated with the formulation of Sweden that have been born and buried in Götaland. Another later example is Birger Jarl born in Bjälbo, Östergötland, who played a pivotal role in the consolidation of Sweden. he is buried in Varnhem Abbey in Jälbolung in Västergötland. This is a stone church dating to 800 AD. Several Kings other kings have been buried here such as Knut Eriksson, Erik Knutsson och Erik Eriksson. An archaeological dig in 2007 has identified what most likely are remains of them.

Why would they be buried in an insignificant little church in the middle of nowhere if they were the Kings of Sweden? Why not in Gamla Uppsala around Mälaredalen?

The perception, to a certain degree, in the episodes of BBC’s Vikings is that there was only three Viking centers, those being the "exploring" Vikings from Norway who went to Iceland, Greenland and later Vinland (North America), then there was the "marauding" vikings from Denmark who "raped and plundered" in Britain and finally there was the "trading" Swedish Vikings that settled in Russia (the Rus), they opened up the Volga trade route, all the way down to Constantinople and possibly as far as northern Iran, who later became known as Varangians during their employ as guards.

This is of course not true at all. There is so much more too it. The main artery connecting boat traffic from Norway (Skagerrak), Denmark (Kattegat) and internally in Sweden was the river Göta älv, one of the highways at that time.

Göta älv was an important trade rout and many finds are made to this day in and around this river. On this stretch the Ale Viking village have been set up, where you can experience the everyday life during Viking times.

Along the river you have the old town Lödöse, a rich archaeological area where many finds have been made over the years. Old Lödöse, was basically the Gothenburg (port town) of the Viking age. Only about an hour away there is the town Skepplanda, which literally means "ship landing", because here is where the ships "landed". It is not surprising then that it’s right in this area, close to the town of Alafors where the Viking merchant ship Äskekärrskeppet was found in 1933 and a later second find in 1993. A replica of the ship, named Vidfamne was completed in 1994. It’s the only Viking ship so far discovered in Sweden.

In Alafors, it’s believe there was a Viking shipyard. I’m sure there would be many more finds, if the will and desire to look was there.

So, is any of this not worth mentioning in the documentary? Nope, let’s go to Stockholm instead. 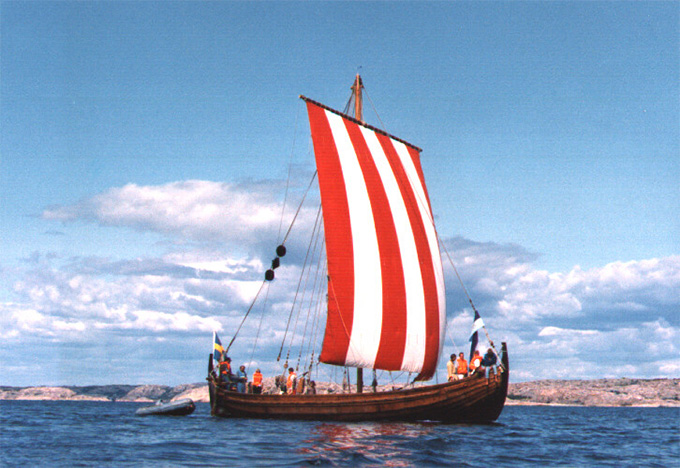 An interesting detail is that on the stretch between Alafors, Skepplanda and
Lödöse along the Göta River, you have a (today) small village called Alvhem this village etymologically connects perfectly with the mythical location of the home of the Alvs (Elfs) Álfheimr (region).

This area is just a small portion of the entire "triangle of omission" that BBC’s Vikings documentary avoids.

Please see and read more about Äskekärrskeppet on this page (Note translation is from Google).

We could go on and on with inconsistencies, omissions, etymological problems with the official story of the location of the formulation of the seat of power in Sweden (Uppsala / Ubsola), but we’ll leave that for now. This is an ongoing historical unraveling that will continue.

For Swedish speaking audience, please take the time to see the excellent documentary Svearikets vagga by the late Dag Stålsjö.