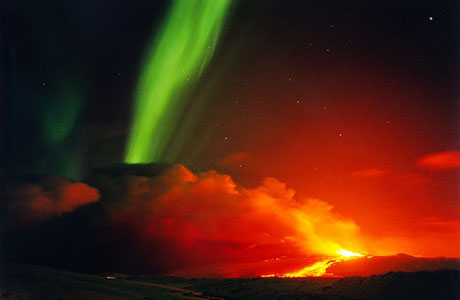 Photo Source click here
A team of scientists announced today confirmation of a link between massive volcanic eruptions along the east coast of Greenland and in the western British Isles about 55 million years ago and a period of global warming that raised sea surface temperatures by five degrees (Celsius) in the tropics and more than six degrees in the Arctic.

The findings were reported in this week’s edition of Science.

The study is important, experts say, because it documents the Earth’s response to the release of large amounts of greenhouse gases – carbon dioxide and methane – into the atmosphere, and definitively links a major volcanic event with a period of global warming.

"There has been evidence in the marine record of this period of global warming, and evidence in the geologic record of the eruptions at roughly the same time, but until now there has been no direct link between the two," said Robert A. Duncan, a professor in the College of Oceanic and Atmospheric Sciences at Oregon State University and one of the authors of the study.

Other authors are Michael Storey, from Roskilde University in Denmark, and Carl C. Swisher, from Rutgers University.

The Paleocene-Eocene thermal maximum, or PETM, was a period of intense warming that lasted roughly 220,000 years. In addition to the warming of sea surface waters, this event – characterized by scientists as a "planetary emergency" – also greatly increased the acidification of the world’s oceans and led to the extinction of numerous deep-sea species.

Warming periods in Earth’s history are of interest as analogs to today’s climate change, Duncan said.

The international science team was able to link the PETM with the breakup of Greenland from northern Europe through analyzing the ash layers deposited toward the end of the peak of the volcanic eruptions. Using chemical fingerprints and identical ages, they were able to positively match ash layers in east Greenland with those in marine sediments in the Atlantic Ocean.

"We think the first volcanic eruptions began about 61 million years ago and then it took another 5 million years for the mantle to weaken, the continent to thin and the molten material to rise to the surface," Duncan said. "It was like lifting a lid. The plate came apart and gave birth to the North Atlantic Ocean."

The link from the volcanism to the warming period came through correlations with the marine fossil record. Dramatic changes in the carbon-isotopic composition of the ocean, corroded plankton shells, and the extinction of some bottom-dwelling organisms characterize the PETM. This interval occurred about 300,000 years before the ash layer, at the peak of volcanic activity in east Greenland.

The scientists speculate that massive release of greenhouse gases – carbon dioxide and methane – from the "out-gassing" of the lava flows and heating of organic-rich sediments in basins along the east Greenland margin were responsible for the global warming and changes in ocean chemistry.

The breakthrough came from being able to find a marker – the ash eruption – that was distributed all over the North Atlantic, and showed up in the marine record as well, Duncan said.

The volcanic activity that took place in Greenland 55 to 61 million years ago brought up some 10 million cubic kilometers of magma from below the Earth’s surface. These lava flows can be plainly seen today in Greenland, western Scotland and the Faeroe Islands, where they cooled, leaving a layered sequence of lava flows as deep as six kilometers in some places. Duncan said the eruptions are similar in scale with the well-known Deccan Flood Basalts in India.

"They are also about 40 times as big as the Columbia River basalts in Oregon and Washington," he said.

The Columbia River basalts likely had few global impacts, but the Deccan Flood Basalts, the Siberian Traps, and the Parana Flood Basalts in South America all coincide with periods of global warming or changes in the ocean chemistry, Duncan pointed out. No conclusive links have been established, however, he added.

"Similarly large submarine volcanic events correlate with major marine anoxic events – periods of no oxygen in the deep-ocean water – which we think are triggered by high surface productivity of plankton that have responded to nutrients released into the ocean by hydrothermal activity," Duncan said.