The Godfather Of Global Warming (Maurice Strong) Is Dead! 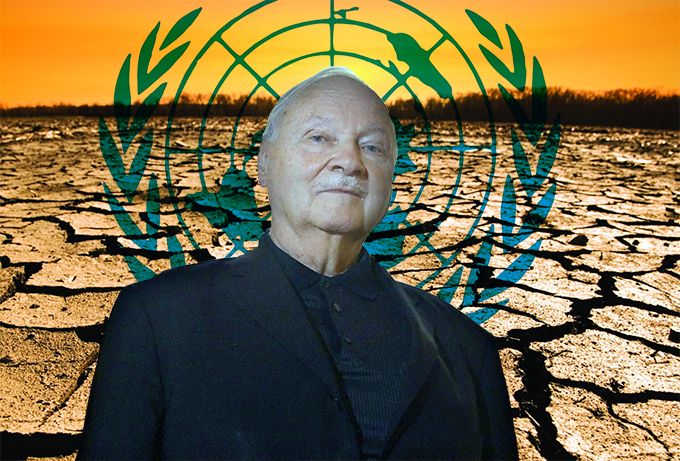 His name was Maurice Strong (picture above), Canadian billionaire, diplomat and UN apparatchik, and though you may not have heard of him, he probably did more to make your world a more expensive, inconvenient, overregulated, hectored, bullied, lied-to, sclerotic, undemocratic place than anyone post, Stalin and (his personal friend) Mao.

He’s the reason, for example, that most of the world’s leaders, 40,000 delegates and their attendant carbon mega-footprint descended here on Paris yesterday in order to talk about magical fairy dust for two weeks and then charge you $1.5 trillion (that’s per year, by the way) for the privilege.

He’s the reason that “climate change” is now so heavily embedded within our system of global governance that it is now almost literally impossible for any politician or anyone else whose career depends on the state to admit that’s it not a problem and to argue that there are more important issues in the world, like maybe the terrorism that killed over 130 innocent people just the other week now, where was it?- oh yeah, here in Paris where for some bizarre reason all the delegates are talking about carbon emissions instead…

He was the father of the mother of all climate summits: the one in Rio in 1992 that spawned a million and one bastard offspring, like the one in Paris now.

He was the main instigator of the blueprint for arguably the most sinister and insidious assault on liberty and free markets: Agenda 21.

If you had met him – if you’d even noticed him – you would have probably quite liked him:

One of the most remarkable things about Strong was how unremarkable he was in person. Somebody once said that you wouldn’t pick him out of a crowd of two.

Nevertheless, he was an avuncular and likeable figure, even to those who disagreed strongly with his world view, as I did. I interviewed him numerous times over a 20-year period, and found that he took scarcely-concealed delight in explaining his often Machiavellian political manoeuvrings.

But as I argue in Watermelons – which gave a lot of space to Strong – it’s a big mistake to expect that supervillains will always have scars down the side of their face and fluffy white cat on their lap.

Strong’s true evil lay in the effects of his acts, not in his (claimed) good intentions.

Then again, the mask did occasionally slip.

In his 2000 autobiography Where Are We Going? he projected that by 2031 two thirds of the world’s population might have been wiped out. This, he chillingly described as:

“A glimmer of hope for the future of our species and its potential for regeneration.”

See: it’s perfectly OK to fantasize about the deaths of maybe 5 billion people – as long as you show at the end that you really care: you’re thinking about the future of humanity.

Strong sincerely believed all this Malthusian stuff and that was the problem. It became our problem because unfortunately – see that charm, above – he was such a skilled operator, with an endless appetite for labyrinthine bureaucracy and the will to embed it in the system.

The United Nations, which he joined early in 1947 as a lowly assistant pass officer in the Identification Unit of the Security Section in New York, was his perfect playground.

It was where, he quickly realized, he could achieve his dream of a world of global governance by a self-appointed elite. And the best way to go about this, he understood, was by manipulating and exploiting international concern about the environment.

Strong was never shy of admitting what he was about:

“Our concept of ballot box democracy may need to be modified to produce strong governments capable of making difficult decisions, particularly in terms of safeguarding the global environment.”

Or, as he put it when he’d wormed his way through the system to the position of Secretary-General of the United Nations Conference on Environment and Development in 1991:

Current lifestyle and consumption patterns of the affluent middle class – involving high meat intake, use of fossil fuels, appliances, home and workplace air-conditioning and surburban housing – are not sustainable. A shift is necessary which will require a vast strengthening of the multilateral system, including the United Nations.

This was the purpose of the Rio Earth Summit – and on the non-binding but secretly deadly agreement Strong managed to gull 179 sovereign nations into signing: Agenda 21.

If you don’t know about Agenda 21, you should. This final quote from Strong will give you an idea how illiberal and undemocratic it is – a blueprint for one-world government by an unelected bureaucracy of technocrats, enabled by diehard progressive activists.

The concept of national sovereignty has been an immutable, indeed sacred, principle of international relations. It is a principle which will yield only slowly and reluctantly to the new imperatives of global environmental co-operation. It is simply not feasible for sovereignty to be exercised unilaterally by individual nation states, however powerful. The global community must be assured of global environmental security.

Now perhaps you understand why the people in the world most saddened by Maurice Strong’s death are currently all at Le Bourget on the outskirts of Paris at COP21, plotting the new world order.

“We thank Maurice Strong for his visionary impetus to our understanding of sustainability. We will miss you,” said Christina Figueres, the head of the UNFCC, which is in charge of the Paris conference.

The rest of us, once familiar with what Maurice Strong did, may not feel quite so teary-eyed.

De mortuis nil nisi bonum, they say. But I think we can make an exception for this particular totalitarian control freak.