Wall Street Plot to Remove FDR Was a Ruse 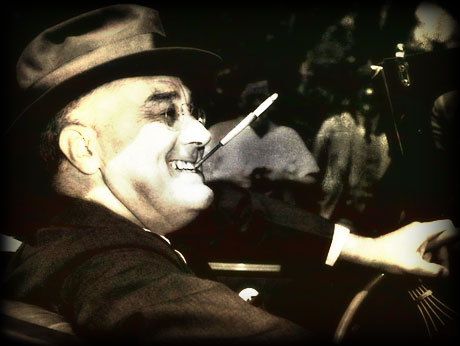 The story that Wall Street tycoons planned to overthrow FDR in 1933 is still making the rounds in 2007.
Last week, the BBC  named "Dubya's" grandfather, Prescott Bush as one of the conspirators.

Clearly, the Illuminati bankers staged the "planned coup" to give FDR credibility as champion of the common man and Wall Street's nemesis. As I will show, they routinely used such tricks to build up their Presidential puppet.

The NWO apparently still considers Roosevelt and his model of Big Government as a propaganda asset. Fascism prefers the facade of socialism as we have seen in the case of both Communism and Nazism.

The conspirators (members of the "American Liberty League") approached retired Major General Smedley Butler to use 500,000 veterans to remove FDR and become a Mussolini-like figure himself.
Smedley Butler was the LAST man you would ask if you were serious about such a coup. However, if you wanted someone to expose your coup ( as he did; thought it "smacked of treason,") Butler was definitely the "go-to" person.

The most decorated Marine in history; Gen. Smedley Butler recently had been forced to resign by Herbert Hoover calling Mussolini a "mad dog" and warning that his fascist cohorts "were about to break loose in Europe." Butler refused to retract his remarks and thus became a national hero overnight.

Nor was Butler fond of Wall Street, stating the bankers used the US army as "gangsters for capitalism" -- thugs and debt collectors:

"Looking back on it, I feel that I could have given Al Capone a few hints," Butler said. "The best he could do was .. operate his racket in three districts. I operated on three continents."  ("War is a Racket" 1933)

"There was definitely something crazy about the whole affair," remarked Curt Gentry. "Butler who had gained prominence for speaking out against fascism, being asked to become an American Duce." (J. Edgar Hoover, p.203)

Nevertheless, Gentry and most other historians accepted the tale, indicating that they function as highly paid flacks.

The story received its widest currency in Jules Archer's book "The Plot to Seize the White House" (1973). Judging from Archer's other works, he is either the Illuminati's best propagandist or biggest dupe (or both.)

His other subjects include such "defenders of the people" as: Trotsky, Mao Tse Tung; Chou En Lai; and Ho Chi Minh. He has also penned books about such spontaneous popular  movements as feminism, civil rights and environmentalism.

Who Was FDR?
For the answer, we are indebted to a book by a courageous honest, public-spirited New York doctor, Emmanuel Josephson: "The Strange Death of Franklin D. Roosevelt" (1948).
FDR was the scion of two Illuminati families, the Delanos and the Roosevelts. He was related to a dozen US Presidents: four on the Roosevelt side and eight on the Delano side. He was a third cousin of King George VI and Queen Elizabeth.

These families have some Jewish antecedents but they also have Dutch, German, Swedish and principally English blood. FDR's mother's father, Warren Delano made a sizeable fortune in the opium trade. His father James Roosevelt was Vice President of a railway and director of several companies.

FDR was a spoiled brat who could always change the rules to suit his whims. He was tutored privately, and failed law school but was allowed to enter the bar anyway. He never held a real job. In the 1920's, he helped float some stock market scams. As Governor and later President, he was extremely suggestible, evasive and shifty. Louis Howe created his public persona and did his thinking for him. He was FDR's "alter and wiser ego." (102)

FDR had a small army of speechwriters and sometimes there were screw-ups. For his Democratic nomination acceptance in 1932, he was handed two speeches with diametrically opposed views and read them both. (157)

After his attack of encephalomyelitis, the Rockefellers gave him a health spa at Warm Springs, Georgia. They subsequently funnelled millions of dollars to FDR in the guise of contributions to his "foundation" to help the sick. Dr. Josephson found that the institution did not accept charity cases. (118-ff)

In Josephson's words, "Roosevelt was magnificently bribed to run for office. By the end of 1930, some $700,000 was poured into the coffers of the Foundation ...[FDR] was the pathetic puppet of conspirators scheming the destruction of democracy and the establishment of an American monarchy." (95, 124)
In return, the US Treasury under FDR spent hundreds of millions bribing Saudi King Ibn Saud and building oil infrastructure in Saudi Arabia to benefit Standard Oil. (262-263)

Josephson said the basic doctrines of the Rockefeller Empire are "feudalistic monarchic government" ... "monopoly of every necessity of life and of national existence, and absolute dictatorship..." (86-87)

The rich must "divide and rule": " The people must be dealt with not as Americans but as minorities set at each other's throats, labor vs. Capital, Black vs. White, Catholic vs. protestant, Christian vs. Jew for e.g." (87) He could have added male vs. female and gay vs. straight.

FDR learned the game from his cousin Theodore Roosevelt who pretended to be a "trustbuster," while remaining a creation of the trusts.

The contributors to FDR's 1932 campaign include a Who's Who of the US business elite, the same people who supposedly tried to overthrow him a year later: Hearst, Rockefeller, Morgan, Baruch, Du Pont, Astor.

In 1933, a group of "publicity men" advised that Fascism was becoming unpopular in America and FDR could score points by opposing the Nazis. "They suggested that Hearst and his publications launch a sham attack on Roosevelt and at the same time pretend to support Nazism and Fascism, thus throwing the Anti-Nazis and Anti-Fascists in the Roosevelt camp." (167)

"As the perverters  of public opinion expected, the gullible public raged at Hearst and flocked to the standards of Roosevelt, blind to the fact that he was giving them another of the same brand of dictatorship." (167)

The antagonism was an utter sham. Hearst employed FDR's son Elliot, and his daughter and her husband! Similarly the public enmity of the munitions manufacturing Duponts was also a sham. Ethel Dupont married FDR Jr. !

"The Liberty League was then set up for the ostensible purpose of attacking Roosevelt and fighting his re-election. This served to throw the entire pacifist vote into Roosevelt's camp and helped reassure his re-election." (169)
Clearly the "Fascist Coup" was another clever ploy invented by the "publicity men."

Conclusion
Curtis Dall was a banker and FDR's son-in-law. He portrays the President not as a leader but as a "quarterback" with little actual power. The "coaching staff" consisted of a coterie of handlers ("advisers" like Louis Howe, Bernard Baruch and Harry Hopkins) who represented the international banking cartel. For Dall, FDR ultimately was a traitor manipulated by "World Money" and motivated by conceit and personal ambition.

The 1933 Fascist Coup is indicative of the trouble the elite takes to manipulate the public. No President (until George W. Bush) did more to take America down the road to tyranny.
Today we have to take attacks on George W Bush with a grain of salt. They are designed to drive the public into the open arms of Hilary Clinton or Barak Obama. In fact, much of the conflict in the world may be central banker created and controlled.