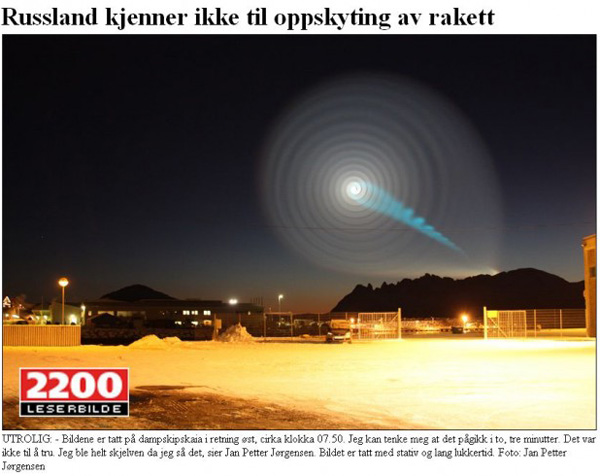 Update: Apparently this strange light was a Russian Bulava missile launch failure. From the Russian Interfax News Agency: Bulava missile launch failed - Dec 9. Here is the link to Interfax press release. Just keep in mind that the Russian military might claim responsibility for this anomaly just to help quiet the inquisitive minds out there. There are Intergovernmental Military Forces (IMF's) who could have asked the Russian army to claim responsibility for this.

You've probably heard about the strange Blue light beam and spiral seen by many Norwegians up in Tromsø the morning of the 9th.

Was this a test of Project Blue Beam or is it HAARP at work? A third theory is that it's a failed Russian rocket. This was the explanation of Jonathan McDowell, an astrophysicist at the Harvard-Smithsonian Center for Astrophysics in Cambridge. The question is how can he be so certain that it’s a failed test of a Russian Bulava ballistic missile when no radar images (yet) exists, neither has any detectors seemed to picked up on it. The Joint Functional Component Command for Space at the Vandenberg Air Force Base are keeping an eye on space activity and so is the Missile Defense Agency. There are other similar agencies out there as well, nothing from them yet and the Russian Military has denied doing missile tests.

It looks more like a “projection” of some kind, similar to project blue beam but it seems to be originating from the top of (behind) the mountain in the photographs.

Look at the video below, especially the moving footage, it’s like a “portal” opening. A "black hole" suddenly opens up inside the spinning spiral. If the spiral is created by the rocket's exhaust as suggested by Jonathan McDowell, then why is the vapor or fume dissipating from the center and outward? It’s also happening very rapidly in the footage? Its looks like someone is adjusting the lens of a “projection”. It's a very strange effect and I still can’t get my head around the fact that the whole spiral seems to be spinning as well. We got questions but not many answers yet. Keep that in mind as you read the below article. Also take a look at the simulation video. Something just feels off with the explanations provided so far.

It looked like a time-travelling vortex fit for Doctor Who, but a strange spiral observed in the skies above Norway on Wednesday morning was actually a failed Russian missile launch, says a Harvard astrophysicist who monitors space launches.

The giant, glowing white spiral was reportedly visible all over northern Norway between about 0645 and 0700 GMT. "It consisted initially of a green beam of light similar in colour to the aurora with a mysterious rotating spiral at one end," eye witness Nick Banbury of Harstad said, according to Spaceweather.com. "This spiral then got bigger and bigger until it turned into a huge halo in the sky with the green beam extending down to Earth."

Speculation that it was a bright meteor was quickly dismissed – in part because the apparition lasted for too long to be an incoming space rock. Suspicion then turned to an out-of-control missile.

That is exactly what it was, says Jonathan McDowell, an astrophysicist at the Harvard-Smithsonian Center for Astrophysics in Cambridge, Massachusetts, and author of Jonathan's Space Report, a fortnightly email newsletter about space launches. "It's definitely a missile launch failure," he told New Scientist.

'Embarrassing setback'
He says it was most likely a failed test of Russia's submarine-launched Bulava ballistic missile, which is intended to be able to evade missile-defence systems.

"We know that the Russian Navy submarine Dmitry Donskoy is in the White Sea and was preparing for the 12th test launch of the Bulava missile, which has had numerous failures," he says.

Of the missile's 11 previous launches since 2005, six have been failures, a track record that might explain why Russia has reportedly denied a Wednesday launch, McDowell says: "This could be because another Bulava failure is a huge and embarrassing setback for their programme."

Spewing flame
Just how would a missile be able to create such a perfect spiral? McDowell says the shape suggests the failure occurred well above the atmosphere. If it had occurred at lower altitudes, atmospheric drag would have caused the missile to fall quickly to Earth, creating a downward-pointing corkscrew pattern whose contrails would have been blown "this way and that" by wind, he told New Scientist.

The Bulava missile has three stages that fire in succession as it climbs up in altitude. "Probably what happened is that stages 1 and 2 did just fine and were discarded in turn, and then stage 3 started burning and almost immediately went wrong," McDowell says.

He says the third stage's nozzle, which directs the rocket's exhaust plume, may have fallen off or been punctured, causing the exhaust to come out sideways instead of out the back. "The sideways thrust sends the rocket into a spin, spewing flame as it goes," he says.

"If thrust was terminated right away, then you wouldn't see the spiral," he continues. "The unusual thing this time is that the missile was allowed to carry on firing for a bit after it went wrong."