"When twilight dims the sky above" 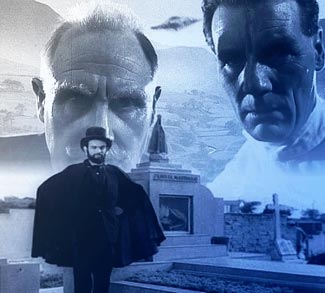 Where it intersects the space at hand, this shaman with the hoops stands - Aligned like living magnetic needle between deep past and looming future - Bruce Cockburn

Since I began to regard "High Weirdness" and associated UFO phenomenon with new eyes - which means ever since I discovered Jacques Vallee, and digested the first volume of Richard Dolan's UFOs and the National Security State - I've wondered about Brazil.

Around the world, numinous moments of contact with an "alien Other" may provoke inspiration or dread, but almost never do they occasion the injury or death of the contactee. Bizarre entities may threaten, but there's also often an unaccountable futility to their threat. The Hopkinsville siege, for instance, which followed upon a UFO sighting, where clawed, bug-eyed creatures seemingly impervious to gunfire spent a night repeatedly approaching a farmhouse and terrifying the family within, yet were unable or unwilling to broach the feeble doors or windows. Donald Schrum's similar experience nine years later in California, though hounded by very different entities after witnessing an apparent UFO land nearby while on a hunting trip. Schrum spent a night in a tree fending off three strange, awkward figures by tearing off strips of his clothing, setting them on fire and throwing the smoking remnants down upon them. The "men in black," "phantom clowns" and "phantom social workers" which make great demonstrations of intimidation and menace while also showing an inability to make good on it. When injury does occur to a contactee, as it did to Betty Cash of the Cash-Landrum encounter, the injuries are usually incidental and not with intent.

Brazil is different. In Brazil, UFOs maim and kill with purpose and intelligence. Do you remember the "chupas," refrigerator-sized barrels or boxes skimming roofs and treetops, shooting concentrated beams of radiation at hunters and villagers? Vallee has traveled to the region and interviewed survivors and witnesses. One doctor he spoke to had seen no fewer than 35 patients, all telling the same story of being struck by beams of intense white light and exhibiting similar burns and symptoms of dizziness, headaches, numbness and anemia. Vallee writes in Confrontations that:

Nobody has ever ridiculed these people. Their intelligence has never been insulted by the pundits of the New York Times or the arbiters of rationalism of Le Monde. They speak in simple, direct ways about what they saw. The admit to being scared, and when they speak about illness and death it is in the same calm, even voice with which one speaks about the reality of all the mysteries around us.

In the same book Vallee tabulates claims of UFO-related deaths, and excluding those that can be deemed accidental, every individual fatality is Brazilian.

Former skeptic turned Ufologist Bob Pratt, who died a year ago today, spent the last 25 years of his life investigating the subject. His investigations often led him to Brazil. (Some of Pratt's original research may be read here). Brent Raynes records part of a conversation with Pratt in his book Visitors from Hidden Realms:

What intrigues me more than anything else is that some UFOs in Brazil have been very aggressive, perhaps even hostile. They have terrorized many people, they have injured more than just a few, and they have left others dying.

Nearly every case in my book UFO Danger Zone shows the harrowing effect an encounter can have in Brazil. They include injuries, deaths, levitations, attempted levitations, and people being zapped by beams of light from UFOs. And there is nearly always terror.... Sometimes people weren't safe even in their own homes because beams of light from UFOs would pierce tile roofs as if they didn't exist, and burn someone inside.

In 1981 Pratt saw the wounds of Claudiomira Rodrigues, who told him that three yers before she was awakened by a beam of light shining through her window. Raynes notes that "Outside she could see, from the chest up, what looked like a man in a diving suit, but his eyes seemed unusually small. She said he had an instrument that resembled a pistol. Aiming it in her direction it shot a beam three separate times.... [leaving] three small pinpoint scars in a triangular pattern on the upper right side of her chest."

So what are we witnessing here? Is the discrepancy between the manifestations of UFO phenomenon in Brazil and elsewhere a socio-cultural artifact, or could something else account for it? Answering that question may go some way towards answering the more fundamental questions about the nature of the phenomenon.

And here's something that may inform our inquiry:

What is the South Atlantic Anomaly?

The Earth is surrounded by a pair of concentric donut-shaped clouds called the Van Allen radiation belts which, like magnetic bottle, store and trap charged particles from the solar wind. They are aligned with the magnetic axis of the Earth, which is tilted by 11 degrees from the rotation axis of the Earth, and are not symmetrically placed with respect to the Earth's surface. Although the inner surface is 1200 - 1300 kilometers from the Earth's surface on one side of the Earth, on the other they dip down to 200 - 800 kilometers. Above South America, about 200 - 300 kilometers off the coast of Brazil, and extending over much of South America, the nearby portion of the Van Allen Belt forms what is called the South Atlantic Anomaly. Satellites and other spacecraft passing through this region of space actually enter the Van Allen radiation belt and are bombarded by protons exceeding energies of 10 million electron volts at a rate of 3000 'hits' per square centimeter per second. This can produce 'glitches' in astronomical data, problems with the operation of on-board electronic systems, and premature aging of computer, detector and other spacecraft components.

More here on the effects of the Anomaly:

Random glitches affect humans as well. Since the days of Apollo 11, astronauts in space have reported seeing random flashes of light—with their eyes closed. These flashes are believed to be caused by energetic particles striking sensitive areas of the retina. In a recent experiment, astronauts aboard the Mir wore detector helmets to help researchers correlate the number of reported flashes with the measured particle flux. If the flashes increased when Mir entered the South Atlantic Anomaly, then protons would be revealed as the likely cause; if not, then heavy ions (which appear in equal amounts inside and outside the proton belt) would be indicated. The frequency of the flashes increased in the Anomaly, but only slightly, suggesting that protons alone are not responsible, but neither are heavy ions.

So it seems that the South Atlantic Anomaly may well have a few more surprises in store.

Credible UFO reports frequently mention the demonstration of highly electro-magnetic properties. ("The radar displays went completely blank and the gyro was spinning very rapidly, as if a strong magnetic force was present," Raynes quotes retired Admiral Jorge Martinez, former Chilean Chief of Naval Operations, regarding one instance in which he'd witnessed a UFO emerge from the ocean.) Could Brazil's anomalous UFO encounters be accounted for by the coincident anomaly in the Earth's geomagnetic field? Could the unique hostility they exhibit in the country be attributed to the relative concentration of radiation over the region? In which case, elsewhere, their aggression might somehow be held in check by more efficient geo-magnetism.