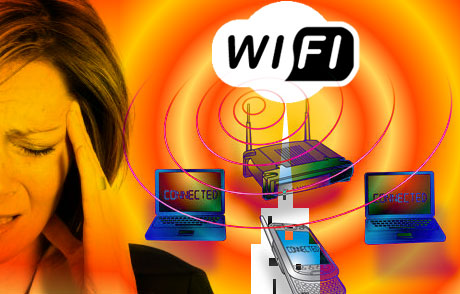 Britain's top health protection watchdog is pressing for a formal investigation into the hazards of using wireless communication networks in schools amid mounting concern that they may be damaging children's health, 'The Independent on Sunday' can reveal.

Sir William Stewart, the chairman of the Health Protection Agency, wants pupils to be monitored for ill effects from the networks - known as Wi-Fi - which emit radiation and are being installed in classrooms across the nation.

Sir William - who is a former chief scientific adviser to the Government, and has chaired two official inquiries into the hazards of mobile phones - is adding his weight to growing pressure for a similar examination of Wi-Fi, which some scientists fear could cause cancer and premature senility.

Wi-Fi - described by the Department of Education and Skills as a "magical" system that means computers do not have to be connected to telephone lines - is rapidly being taken up inschools, with estimates that more than half of primary schools - and four-fifths of secondary schools - have installed it .

But several European provincial governments have already taken action to ban, or limit, its use in the classroom, and Stowe School has partially removed it after a teacher became ill.

This week the Professional Association of Teachers, which represents 35,000 staff across the country, will write to Alan Johnson, Secretary of State for Education, to demand an official inquiry. Virtually no studies have been carried out into Wi-Fi's effects on pupils, but it gives off radiation similar to emissions from mobile phones and phone masts.

Recent research has linked radiation from mobiles to cancer and to brain damage. And many studies have found disturbing symptoms in people near masts.

Professor Olle Johansson, of Sweden's prestigious Karolinska Institute, who is deeply concerned about the spread of Wi-Fi, says there are "thousands" of articles in scientific literature demonstrating "adverse health effects". He adds: "Do we not know enough already to say, 'Stop!'?"

For the past 16 months, the provincial government of Salzburg in Austria has been advising schools not to install Wi-Fi, and is considering a ban. Dr Gerd Oberfeld, its head of environmental health and medicine, calls the technology "dangerous".

Sir William - who takes a stronger position on the issue than his agency - was not available for comment yesterday, but two members of an expert group that he chairs on the hazards of radiation spoke of his concern.

Mike Bell, chairman of the Electromagnetic Radiation Research Trust, says that he has been "very supportive of having Wi-Fi examined and doing something about it". And Alasdair Philips, director of Powerwatch, an information service, said that he was pressing for monitoring of the health of pupils exposed to Wi-Fi.

Labour MP Ian Gibson, who was interviewed with Sir William for a forthcoming television programme, last week said that he backed proposals for an inquiry.

The school that took on mobile phone companies

Two giant mobile phone companies are to move a mast at a primary school, after parents claimed their children fell sick.

The mast was already in use when St Edward's RC primary school opened in Coleshill, Warwickshire 11 years ago. It is owned by O2, which rents space on it to Orange. An O2 spokesman said "there were concerns from some of the local people that there are health issues" but added that the mast posed no risks to health.

But parents said children and staff suffered from insomnia, headaches and numbness. They conducted a survey of 22 staff who had been at the school for the 11 years, and 59 children who had been pupils for seven years.

The parents have been backed by Warwickshire County Council and their MP, Mike O'Brien, the Solicitor General. Parents and their representatives held talks with O2.

More: Danger on the airwaves: Is the Wi-Fi revolution a health time bomb?
Wireless Oakland went live in a test today