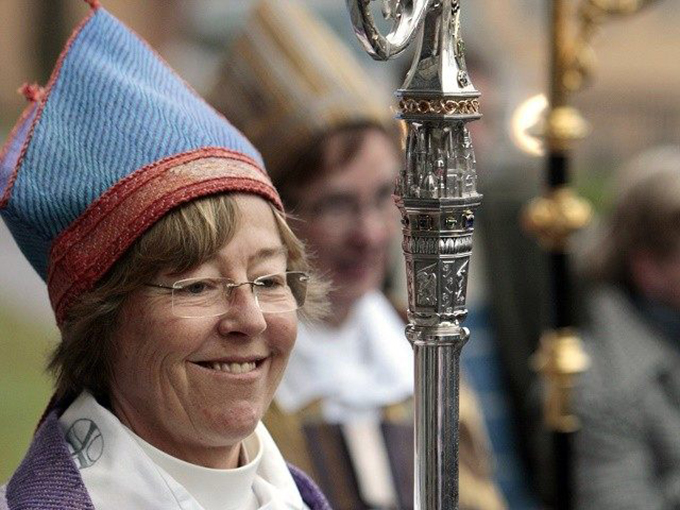 Editor's note: Yes, this is a sign of the decay of Western civilization. Yes this story of a sell-out lesbian "christian" bishop peddling islam is truly a sign of a terrifying degeneracy in Sweden. Despite that, who can say that they miss the Swedish church? It's been dead for some time now. Christianity was never for the Nordic people! We have had our own strong and powerful traditions for thousands of years before Christianity imposed itself from the top down, by ruthless Kings unfit to rule their people, as made clear by their traitorous actions. Finally we can walk away from the progressive hellhole and suicidal death cult that the Swedish church has become, and we can embrace our most deep rooted tradition and the true spirit of our Northern soul.

Odin, Thor, Freya and our other gods and goddess have something ENDLESSLY more powerful and vital to offer us, in these times of confusion, uncertainty and lethal weakness. Our primordial tradition has something to offer us that we desperately need, in order to combat the existential threat that is facing the people of Sweden and the North. Something that this empty, liberal, hollowed out, self-hating homo-church never can help us to attain, not even comprehend. In fact, the church of Sweden is not just an institution that has let go of our identity and traditions, dropping the ball on it's primary duty. It has now become a declared enemy of the people. Actively turning its back on its own flock, on it's own people, favoring strange religions and foreign people above its own. A rot has set in and it's time to cut it out, before it spreads, before it takes all of us with it down the abyss. We have to remove ourselves from it and push it over the edge ourselves. The unforgivable sin would be if we just stood by and did nothing while our people died.

Eva Brunne, who was made the world’s first openly lesbian bishop by the church of Sweden in 2009, and has a young son with her wife and fellow lesbian priest Gunilla Linden, made the suggestion to make those of other faiths more welcome.

The church targeted is the Seamen’s mission church in Stockholm’s eastern dockyards. The Bishop held a meeting there this year and challenged the priest to explain what he’d do if a ship’s crew came into port who weren’t Christian but wanted to pray.

Calling Muslim guests to the church “angels“, the Bishop later took to her official blog to explain that removing Christian symbols from the church and preparing the building for Muslim prayer doesn’t make a priest any less a defender of the faith. Rather, to do any less would make one “stingy towards people of other faiths”.

The bishop insisted this wasn’t an issue, after all airports and hospitals already had multi-faith prayer rooms, and converting the dockyard church would only bring it up to speed. Regardless, the announcement has aroused protest.

Father Patrik Pettersson, one of the priests in her diocese and active in the same parish as the Seaman’s mission church has hit back in a blog of his own, complaining there is no way you could equate a consecrated church with a prayer room, remarking “I should have thought a bishop would be able to tell the difference”.

Calling the bishop’s words “theologically unthinking”, he asked what was to be done with crucifixes screwed to the walls, and heavy items such as baptismal fonts.

“Ignoring the rhetorical murmuring”, Pettersson wrote: “The only argument bishop Eva really put forward in support of her view is ‘hospitality’… How do you respond to that? Not much of a basis for discussion, as one colleague put it. The theological, ecclesiological, pastoral and working issues are left untouched”.

The actual priest at the Seaman’s mission was left nonplussed by the comments of the Bishop when contacted by Dagen.se for comment.

As an independent mission the church operates outside of the diocese, and so the bishop has no authority there, a fact reflected by the response of the church director who said the bishop’s words were her business alone.

When asked whether she would be removing the cross from her church, Kiki Wetterberg responded: “I have no problem with Muslim or Hindu sailors coming here and praying. But I believe that we are a Christian church, so we keep the symbols. If I visit a mosque I do not ask them to take down their symbols. It’s my choice to go in there”.

The upper echelons of the Church of Sweden, much like other national churches across Europe, seem to be fully invested in the diversity mission. Back in February, a parish church in multicultural paradise Malmö declared it would be holding a service in solidarity with the local Muslim community as a protest against a march by anti-Islamisation movement PEGIDA in the city.

The priest responsible told media: “During the protest, the Swedish Church is going to hold a service where we express joy for our city and our Muslim friends.

“There is strong support for diverse cultures in Malmö and it is important that the church is there to support that”.

Malmö is Sweden’s gateway to Europe, and is the main point of ingress to the Nordic nations for the thousands of migrants travelling through Europe from Africa and the East who have decided to make it home.

As a major bottleneck into the region, with a single bridge and ferry route connecting the country to the rest of Europe, the arrival of these migrants has heralded an unprecedented level of criminality in the city, as explained to Breitbart London by a recently retired senior police officer last month. Describing the ‘no-go’ zones that have sprung up around the city and calling for greater border controls to get criminal migration under control, Chief Superintendent Torsten Elofsson said:

“Years ago you could go with two officers, no problem. Now you have to send four officers and two cars – if the fire brigade want to go, they have to take a police escort. They throw stones and try to stop the fireman from putting out fires.

“They sabotage the police cars. You can’t leave them unguarded – when you come back to it you find the windows smashed and the tyres deflated. It isn’t quite a no-go zone, but we have had to develop special routines to go there”.

With hundreds of thousands more migrants set to pour into Sweden, a Bishop in Stockholm has proposed removing crosses from a Christian church and replacing them with Islamic symbols in order to cater for Muslims.

Brunne, who is the first openly lesbian bishop of a mainstream church in the world, wants the church to be treated more like a public airport, where prayer rooms are made available to Muslims, by removing Christian symbols and “marking the direction of Mecca.”

The proposal has drawn backlash, with Patrik Pettersson, priest of the Oscars parish in Stockholm, arguing, “The church chapel can not reasonably be equated with prayer rooms at airports and hospitals. The Christian church and chapels are not just any public areas.”

“I have no problem with Muslim or Hindu sailors coming here to pray. But I believe that we are a Christian church, so we should keep the symbols. If I visit a mosque I do not ask them to take down their symbols. It’s my choice to go in there,” said Wetterberg.

It’s also ironic to consider that while Brunne is insistent on being so welcoming to Muslims, she would be executed for being a lesbian in some Islamic countries.

“This is what a society and culture in the midst of suicide looks like,” writes Robert Spencer.

If you think this story sounds too bizarre to be true, then you haven’t acquainted yourself with the progressive “utopia” that is Sweden.

This is a country in which some politicians have called for giving free housing, jobs and welfare to returning ISIS jihadists – all at taxpayer expense.

This is a country that is suffering a major housing shortage yet simultaneously has politicians telling its citizens that they may need to give up their garages in order to house third world immigrants.

Sweden is also a country that hires ISIS-sympathizers to run its immigration boards. The country’s taxpayer-funded “expert” on Islamophobia, Michael Nikolai Skråmo, also went on to join ISIS.