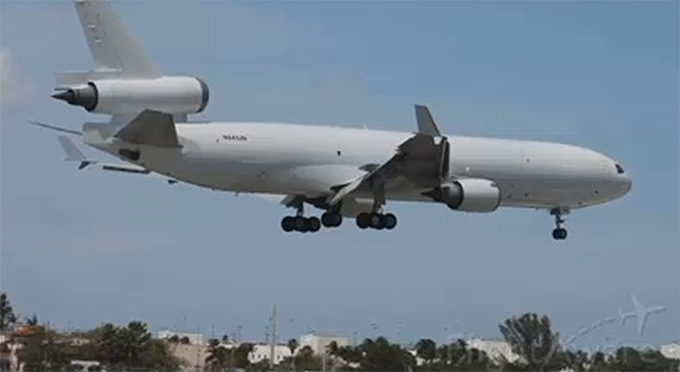 A bizarre story involving a plane registered in Estero has surfaced. The country of Zimbabwe has seized that plane in their country, and inside, they say they found a dead body and cash.

The plane in question is registered to a company called Western Global Airlines, an international air cargo company with headquarters in Estero.

According to their website, the company maintains a fleet of 16 jets, which are then used to move cargo all over the world.

The plane in question is an MD-11 fixed-wing aircraft manufactured in 1995.

The jet took off from Germany on Sunday and was scheduled to land in South Africa, but the pilots made what the airline describes as a "routine maintenance stop" in Zimbabwe.

Ground crews noticed blood dripping from the bottom of the plane and found the body of what appeared to be a stowaway. They think that person snuck in through the plane's landing gear, which severed their arm.

Also on board were millions in South African currency that, according to the Associated Press, was supposed to be delivered to the South African National Bank.

We're learning the plane involved in this incident has flown through Southwest Florida before.

A spokesperson for the airport told us the plane landed at RSW five times with the most recent landing in October. On all five occasions, the airport said the plane was parked here for "routine flight training and light maintenance work."

We’re told the plane was in no way involved in any cargo runs while parked at Regional Southwest.

We have reached out to Western Global numerous times Monday to get their account of what happened, and we're still waiting to hear back.

Zimbabwean authorities have released an Estero-registered cargo jet that was impounded earlier this week after a dead body and cash was found aboard.

Charamba said the MD-11 trijet, owned by Estero-based Western Global Airlines, was traveling from Germany to South Africa when it stopped in the Zimbabwean capital Harare to refuel. Authorities noticed blood dripping from the plane.

Charamba said the dead person was likely a stowaway. A post-mortem report found that the person had died from asphyxiation.