Aug 18, 2014
Dennis Wise is an independent film maker with a background in entertainment and media. Apart from researching and producing documentaries, today he still produces private videos for clients. Dennis joins us to discuss his 6.5 hour documentary called, Adolf Hitler: The Greatest Story Never Told, which has taken the internet by storm. It has been hailed as, “The single most important media contribution in the last 70-years.” The controversial 26 part series was made under the constant threat of being banned by YouTube and after 24 episodes, the inevitable did finally happen. However, by that time it had already circulated around the internet with the series being hosted on numerous websites. What makes the documentary so fascinating is not only the way it single-handedly dismantles the propaganda and myths surrounding Adolf Hitler, but also completely turns on its head the Allies' version of World War Two, in what can only be described as history’s greatest ever cover up. We’ll discuss who many believe was the most evil man that has ever lived, Hitler. Dennis talks about Germany prior to Hitler, events that led up to the war and Hitler’s relationship with the Jews. Also, we talk about the conspiracy theories surrounding Hitler, which do not add up. In the second hour, we’ll talk about how Hitler and events surrounding WWII impact us today. We’ll speak more about the allies and their holy war and the ridiculous claims made about the Nazis. Dennis also talks about Hitler’s view on Freemasons. Then, we’ll discuss the holocaust. Later on, Dennis shares his view on the NWO agenda today. 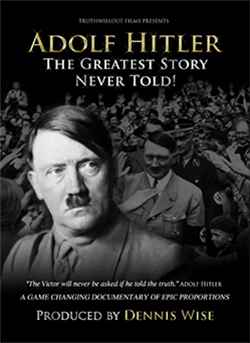