The Untold Story of Black on White Crime

Oct 5, 2015
Colin Flaherty is the award winning author of the bestselling books “White Girl Bleed a Lot” and “Don’t Make the Black Kids Angry.” His story on how a black man was unjustly convicted of trying to kill his White girl friend resulted in his release from state prison and was featured on NPR, the Los Angeles Times and Court TV. Colin joins us for a discussion about the rather painful topics of his two books - Black mob violence and Black on White crime - subjects that the media generally ignores, denies, excuses, condones and even lies about.

We begin by considering how the myth of black victimization, racial hostility in the mainstream media, and the relentless narrative of White supremacy and racism have all contributed to the escalating problem of black mob violence. Colin describes when he first started noticing that the real details behind racially charged riots, violence and assaults are not given proper consideration by journalists covering these stories. We discuss how #BlackLivesMatter spawned the justification of extreme hostility directed at police. Then, Colin talks about an overwhelming amount of video evidence that is continually surfacing and showing an astounding number of accounts of racial harassment and violence committed at the hands of aggressive black culprits. We also get into America’s lack of understanding about the immigration crisis in Europe and the fact that as more Muslims are welcomed into White countries, inevitably more hostility and chaos will ensue.

In the members' segment, we look at the crazy amount of black crime and violence wreaking havoc in many major US cities and now even small towns. Colin gives details concerning black on White crime statistics, and he points to enormous double standards in reporting that ignores evidence, encourages the "I didn't do nothing" mentality, and depicts the sinners as saints. We look at how the de-policing of crime-ridden black neighborhoods and the “diversifying” of White neighborhoods is increasing crime while perpetuating the relentless story of blacks as the victims of White racism. Then, we take stock of the disingenuous reporting on the crime and nasty behavior of Muslim immigrants. Colin calls the refugee invasion in Europe a “demographic time bomb” planted by forces that seek to destroy Whites and Western civilization. At the end, we chew over race conscious programming ideas like unconscious racism and microaggressions, and Colin shares some disturbing examples of the appalling “knockout game.”

whitegirlbleedalot.com
Colin Flaherty YouTube channel
The shocking statistic about Baltimore Everyone is afraid to mention 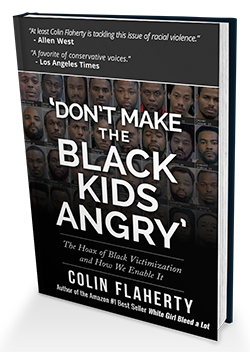