Asatru in the 21st Century

Aug 27, 2014
Daniel Updike (aka Wodenson) is an Asatruar and Gothi of Har’s Hall Kindred from Edmonton, Alberta Canada. Wodenson came to this way of life close to 28 years ago, has been a seminar speaker, and was the originator of “The Asatru & Ancient Runes” series which launched Har’s Hall Kindred in Edmonton. He hosts NRR-Northern Runes Radio, a podcast exploring the Northern European Mythos both religiously, and esoterically. Throughout the program, we’ll discuss what it means to live the Asatru way in the 21st century, awakening our ancient awareness. Daniel first clarifies misunderstandings associated with Asatru such as it being a religion. We’ll hear about the European folk code of honor, ethics, the 9 noble virtues and the 3 norns. Daniel speaks about our ancestral folk traditions and their view of the “dead.” Later, we talk about embracing the struggle so our folk can become more. Struggle is an essential part of being alive and progressing. In the second hour, we’ll discuss European folk who have forgotten who they are, who have lost connection to the folk soul. Additionally, western fallacies have indoctrinated us to lower the bar. Now we must reverse the decay. Daniel also talks about the ways in which Christianity is in opposition to Asatru, such as teaching unworthiness. We’ll discuss the path to becoming more and the battle for the mind and soul of our people. Later, Daniel provides more examples of the Asatru way and how to implement it into our modern lives. He also tells us about the positive Viking view of women and how Vikings were not mindless barbarians as we are told to believe. Daniel leaves us with a closing message. 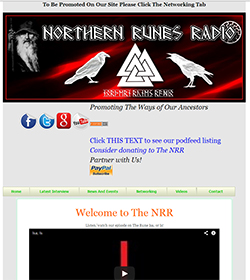