Feb 26, 2016
Alfred Schaefer is a German producer with several YouTube videos that are aimed at exposing the brainwashing, lies and control words that are used to subject entire populations to the Zionist agenda. His video, “Brainwashing: 9/11 & the Holohoax,” Schaefer outlines how the Zio-Jew criminal elite in control of much of Western civilization for the past 70 years have managed to perpetrate a massive deception through manipulation of the mainstream media and political leaders.

Brian Ruhe was a monk in Thailand and has taught Buddhism since 1996 in the Vancouver, BC area. He hosts a YouTube channel talk show where he challenges Jewish supremacy and explores the true history of World War II. Ruhe is the president of the newly formed Thule Society, a peaceful, educational and personal growth training group centered on understanding of the spiritual forces that caused the powerful manifestation of National Socialist Germany and Adolf Hitler.

Alfred joins us for the first time and Brian returns to discuss how Europe has devolved into its current state through the employment of social engineering designed to brainwash all of Western society into marching toward its own destruction. Alfred explains how the discourse has been programmed through a slow inoculation of politically correct control words that work like filters or gates to block out rational thinking and the natural instinct of self-preservation. We discuss how WWII, Holocaust and Nazi propaganda has been used to effectively instill a cult of guilt in the West, which grooms average citizens to fear any questioning of the official narrative that is obviously filled with holes and lies. We look at how the migrant invasion of Europe has been deliberately instigated through manufactured Middle Eastern conflicts in order to dilute any sense of functional cohesion in the West. Brian emphasizes how the push for multicultural societies has eradicated the truth as a defense for preserving the interests of Western civilization.

In the member segment, we focus on the rising tide of anger and discontent that is stemming from the lack of leadership in our criminal governments, and how to channel this energy into freeing ourselves from the chains of enslavement. We look at the propaganda monster that was birthed in the years surrounding WWII to demonize the Germans, which has now been expanded to all White nations. Brian explains the connection between Buddhism and National Socialism and illustrates how Hitler’s knowledge and mastery of the higher realms was part of his ascension to power as one of the most developed and brilliant leaders of the 20th century. We consider the hallmarks of Germany’s halcyon days and signs that we are witnessing a resurgence of traditional values as more and more people grow weary of the cultural Marxist agenda of demoralization and degeneration. Alfred speaks to the importance of overcoming the intimidating emotions triggered by control words like “Nazi,” “anti-Semite” and “racist,” and he outlines some language tools for dealing with people who use psychopathic behaviors to suppress reasonable discussion. Later, we weigh up the leadership qualities required for the European race to survive and overcome the clutches of organized Zionism.

Brian Ruhe show
thulesociety.com
Alfred Schaefer on Youtube
How and why Sweden became multicultural
Stalin's Other War: Soviet Grand Strategy, 1939-1941
9/11 Pavlov's Dogs & Behavior Control Brainwashing
Brainwashing: 911 & the Holohoax by Alfred Schaefer (Video)
9-11 Gatekeepers and Controlled Opposition
Description of the book by Gerard Menuhin, "Tell the Truth ad Shame the Devil"
An English translation of Henry Hafenmayer's open letter: "End of the Lie"
And the English translation of his letter to the subsequent summons for his first letter
Yuri Bezmenov: Deception Was My Job (Complete) 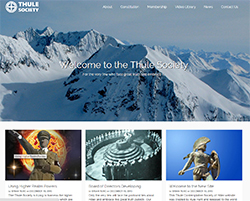