Breaking the Spell, The Holocaust Myth and Reality

Nicholas Kollerstrom, PhD, is an English author, historian of science, and political activist. He was an honorary member of staff at University College London (UCL) for 11 years. Dr. Kollerstrom has always had an interest in Hermetic-alchemical issues and is presently managing New Alchemy Press. He is the author of several articles and books, and joins us to speak about his latest publication, Breaking the Spell, The Holocaust Myth and Reality. We begin our discussion with an analysis of the real physical data that exists relating to the purported existence of huge cyanide gas chambers in Nazi concentration camps. Nick gives details of the numbers and causes of deaths at Auschwitz that were recorded daily and then published, figures that are staggeringly less than the 6 million number that has been seared into the 'official' storyline. We talk about the outbreak of typhus in 1942, the delousing chambers that were created to deal with the disease infestation, and how this ordinary hygiene technology was used in an attempt to decrease mortality rates of valuable workers in the labor camps. Nick brings light to the real purpose of the camps and how the horrific stories developed during the nightmare and confusion of war. Further, he'll explain the lack of any documents or intercepted communications indicating orders to exterminate prisoners, and the reconstruction of history that has created an undebatable transcendental mythos of death by gas chambers. Then, we'll consider the motivations for perpetuating the Holocaust myth and who has come to benefit from what was certainly the worst collective experience that European Jews have endured. Nick breaks down the holocaust narrative that is the direct result of the academic world dismissing evidence multiplied by Hollywood's mythologizing of events. Later Kollerstrom describes signs that people are beginning to wake up to the motives of the holocaust industry. We end with thoughts on sacred war ratifying myths, the persecution of truth seekers, and the need for open discussion and debate regarding one of the most important events of world history.

terroronthetube.co.uk
whatreallyhappened.info
The Six-Million-Heresy that will dissolve Jewry
9/11 activist hands himself in over Cameron remarks
Pages From The Auschwitz Death Registry Volumes
The ITS Collections
10 Hard Facts About the Holocaust
The Treblinka Archaeology Hoax
The Majdanek Gas Chamber Myth
The Great Holocaust Mystery
El Gran Tabu
The Jewish Gas Chamber Hoax 1
The Jewish Gas Chamber Hoax 2
Auschwitz—The Surprising Hidden Truth
One Third of the Holocaust
The 'Problem of the Gas Chambers'
Holocaust, Hate Speech and Were the Germans so Stupid?
The Holocaust Testimonies You DIDN'T Hear
Robert Faurisson — A Most Honorable Man
Prof. Robert Faurisson: An Introduction to Holocaust Revisionism
Exposing the Holocaust Hoax Archive - A HolyHoax Museum
Holocaust™ 'greatest' love story a hoax
Dachau – The U.S. Army and Government lies about "extermination" and "homicidal gas chambers" – Microcosm of the Holocaust™ Fraud
Nazi Shrunken Heads
But how could the Holocaust not be true? by Paul Eisen
A Memorial for the Victims of the Wilhelm Gustloff sinking, Jan. 30th, 1945 – A "hate crime" of epic proportions
David Irving's Website 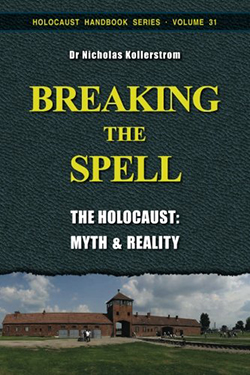