Jul 28, 2014
Ricardo Duchesne teaches sociology and world history at The University of New Brunswick. His publications include one book, 45 refereed articles, one chapter, 13 encyclopedia entries, and 18 non-refereed articles. His book, The Uniqueness of Western Civilization, a major work of 528 pages, was released in February 2011. Currently he is doing research on multiculturalism and the identity crisis of the West. We’ll begin discussing Vancouver City Council’s vote to investigate discriminatory laws and policies imposed by Whites on Chinese immigrants in the city between 1886 and 1947, in order to come up with recommendations for "reconciliation efforts." The approved motion was initiated by Chinese Councilor Raymond Louie. It also calls for staff to report back to council with recommended actions for further compensation and reconciliation efforts. Ricardo is facing complaints after calling Vancouver’s plan an exercise in manipulating white guilt. Then, he’ll discuss how European Canadian history is presented only negatively in Canadian schools, ignoring the pioneering spirit and great accomplishments. We’ll also discuss the erroneous argument being made that all European countries are immigrant countries and that nations are made strong by diversity. Ricardo also talks about the Canadian model of immigration and multiculturalism. In the second hour, we’ll discuss many topics such as nationalist parties in Europe, capitalism, cycles of civilization and young generations who are being brainwashed by diversity dogma. Ricardo speaks about how events will lead to ethnic separatism as events escalate over time. Later, we’ll talk about the foolishness of a “greater good” and making hard decisions, not morally righteous choices that benefit no one. We’ll also discuss immigration restriction from an environmental perspective, which is now politically incorrect to discuss. At the end, Ricardo talks about the current trend to degrade European achievement.

Council of European Canadians
Dr. Ricardo Duchesne
Jürgen Habermas
Will Durant
Anthony Giddens, Baron Giddens
Oswald Spengler
The Decline of the West
The Protestant Ethic and the Spirit of Capitalism

Led Zeppelin - When The Levee Breaks 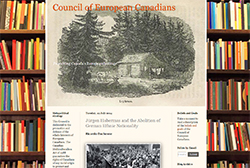