Apr 18, 2014
Ricardo Duchesne teaches sociology and world history at The University of New Brunswick, Saint John, Canada. His publications include one book, 45 refereed articles, one chapter, 13 encyclopedia entries, and 18 non-refereed articles. His book, The Uniqueness of Western Civilization, a major work of 528 pages, was released in February 2011. Currently he is doing research on multiculturalism and the identity crisis of the West. We’ll discuss how in recent decades, the field of world history has been relentless in its downgrading of the idea of Western uniqueness in pursuit of a multicultural point of view. Ricardo Duchesne calls into question much of the scholarly research seeking to justify an anti-Eurocentric spirit and counter-critiques the revisionist movement. We’ll talk about how the revisionist movement strongly disapproves of anyone who might suggest that the West is exceptional or that it blazed a special path in history, although humanity has gained much from the unique heritage of Western cultural and intellectual journey. We’ll continue in the second hour, with the concentrated efforts to destroy western culture as it doesn’t fit in with the New World Order’s egalitarian ways. We’ll address how academia accuses the west of only exploitation, racism and colonization, claiming that the west became rich from robbing others. Then, we’ll discuss how people today are disconnected from their ancestors and lack the understanding of what it took to create modern society. Later, Ricardo talks about the multicultural push onto European countries and the double standards held upon western civilization. The hour ends on the relationship between socialists and capitalists and who is really using who? 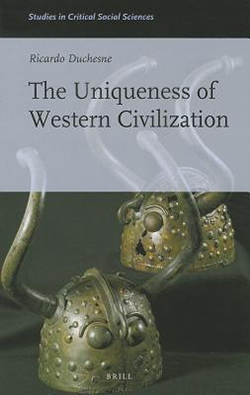