Crimes of the Educators

Apr 27, 2015
Alex Newman is an international journalist, educator, author, and consultant. In addition to serving as president of a small media and information consulting firm, he writes for a wide array of publications in the United States and abroad. He currently serves as a foreign correspondent for The New American magazine and teaches advanced economics to high school seniors. He has co-authored two books, including a just-released major exposé, "Crimes of the Educators: How Utopians Are Using Government Schools To Destroy America's Children," the topic of our discussion. Alex starts the conversation with a brief overview of UNESCO, the largely socialist and communist-led United Nations organization designed to influence and create standards for education, science and culture on a global scale. He explains UNESCO’s Education for All initiative, which seeks to make mandatory changes in the values and beliefs of all of humanity under the guise of educating. Alex reveals some of the very startling ideas that hatched this international scheme, along with the big money that has funded its methodology. We delve into Common Core and the “look-say” reading method, curriculums that are destroying early literacy education and usurping the role of parents into the state. Further, we discuss how billions of dollars of Obama stimulus money has been used to strong-arm state education systems into surrendering to the Common Core consortium. We take a close look at the role public schools are playing in the globalist agenda to socialize Western civilization via dumbing down the population and chipping away at family values. In the second segment, we talk about homeschooling’s tremendous opportunity for parents in combatting this war on intelligence. Alex speaks about how the "sustainability" movement has snuck into schools, where our children are being prepared to be "green, global citizens, " in order to fulfill the vision of UN’s Agenda 21. We examine the heightening levels of immigration across Europe and America, where native populations are plummeting while individual liberties and Western traditions are being destroyed. Alex points to the blatant criminal activity of our educational system, including treason and contributing to the delinquency of minors. At the end, we touch on the declining state of Sweden, which appears to be the blueprint for flushing all of society right down the totalitarian drain.

Irina Bokova
John Dewey
Looking Backward
Look and Say
Look and Say Teaching Method
What is Achieve, Inc., and why should you care?
Replacement Migration: Is It a Solution to Declining and Ageing Populations?
MSNBC Host Melissa Harris-Perry - All Your Kids Belong To Us
Gro Harlem Brundtland
Black Death
World Core Curriculum
Know Your Enemy

Crimes of the Educators: How Utopians are Using Government Schools to Destroy America's Children 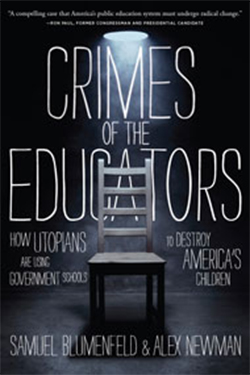