Oct 3, 2014
As a U.S. Intelligence Asset, Susan Lindauer covered anti-terrorism at the Iraqi Embassy in New York from 1996 up to the invasion. Independent sources have confirmed that she gave advance warning about the 9/11 attack. She also started talks for the Lockerbie Trial with Libyan diplomats. Shortly after requesting to testify before Congress about successful elements of Pre-War Intelligence, Lindauer became one of the first non-Arab Americans arrested on the Patriot Act as an “Iraqi Agent.” She was accused of warning her second cousin, White House Chief of Staff Andrew Card and Secretary of State Colin Powell that War with Iraq would have catastrophic consequences. Gratis of the Patriot Act, her indictment was loaded with “secret charges” and “secret evidence.” She was subjected to one year in prison on Carswell Air Force Base in Fort Worth, Texas without a trial or hearing, and threatened with indefinite detention and forcible drugging to shut her up. After five years of indictment without a conviction or guilty plea, the Justice Department dismissed all charges five days before President Obama’s inauguration. In the first hour, Susan shares her story as a former CIA asset and provides inside knowledge of the Middle East conflict. We’ll talk about America’s meddling in the Middle East and what they’re creating. Later, Susan talks about the US Congress as Israel’s arm chair warriors in Washington. Everything comes back to Israel. Additionally, we discuss the important question of who was behind 911. She’ll tell what happened months before the event. In the second hour, Susan continues on her prosecution, detailing what happened when the judge ruled her mentally unfit for trial, thwarting her from speaking the truth and presenting evidence in court. She also comments on those who are suspicious of her story. Then, we’ll speak more about the 911 magician trick. Later, we discuss blowback created by the US government as the descent of American empire.

Nice: ISIS Posts Photo of Their Members Chilling With Sen. John
Samson Option
extremeprejudiceusa.wordpress.com
Partial list of people associated with the Project For The New American Century
You Do Realize that the U.S. Funded and Trained ISIS, Right?
How ISIS terror group amassed $2B in assets
Project for the New American Century

Extreme Prejudice: The Terrifying Story of the Patriot Act and the Cover Ups of 9/11 and Iraq

The Prestige OST - The Price Of A Good Trick 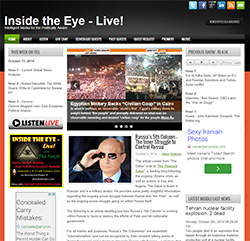