Anthony and Dave from Wise Up Journal and We Are Change Ireland discuss the EU Treaty/EU Constitution and their film "End of Nations - EU Takeover and the Lisbon Treaty". Wise Up Journal documents specific pertinent news from around the world. Wise Up Journal also produces it’s own content from news articles to documentaries. Some are considered controversial. We Are Change mission statement: “a citizens based grassroots peace and social justice movement working to reveal the truth behind the events of September 11th, as well as the lies of the government and corporate elite who remain suspect in this crime.” Anthony and Dave begin talking about their involvement and start with We Are Change and Wise Up Journal. Later, we discuss the rhetoric of the EU treaty and the hidden horrors in "The Charter of Fundamental Rights of the European Union". We also discuss the referendum in Ireland and the different ways it may play out. Anthony and Dave talk about ways to combat the media spin & propaganda as well as how information can spread.

The Lord giveth… and the EU Charter of Rights taketh away *

The EU’s control structure, inside and outside Britain

NO to the Second Lisbon Treaty Vote 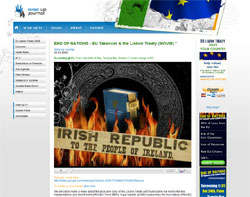