Eugenics, Ready or Not

Jul 31, 2015
Frank Salter is an Australian academic and researcher at the former Max Planck Institute for Behavioral Physiology. He is a political ethologist, studying political phenomena using the methods and theories of behavioral biology in addition to conventional methods. Frank’s recent essay, “Eugenics, Ready or Not” is the platform for our conversation, which begins with clarification of the definition and background of eugenics, along with its links to genetics and the rapidly advancing field of reproductive technology. Frank details some points in history that have given eugenics a bad name, underscoring instances where the state has stepped in and taken authority over individual sovereignty, an action he declares is extremely dangerous. We discuss where eugenics gets mixed up in the utopian dreams of the left, with social engineering schemes based largely on the denial of science and technology. Frank gives examples of positive, negative and coercive eugenics, and we look at the conditions that have created a consumer-driven eugenics industry via the expanding utilization of in vitro fertilization (IVF). In the member’s segment, Frank explains where the field of eugenics is receiving major influence from the cultural left, and we look at the myriad of moral, ethical and societal dilemmas that have sprung up because of the classic utopian socialist ideology that is being thrust forth into civilization by the social sciences and university system. He points to the war against Western society that is being waged through strong anti-white arguments involving the notion of breeding out ethnocentrism and the desire for self-preservation. We talk about the effects of the skewed drive for “diversity” across European and American lands, and we consider how the corroding weight of mass immigration could be clearing the way for a renewed interest in maintaining traditional rights. Frank highlights issues in the study of genetics involving gene editing that are posing dangerous implications for pushing biology out of the social sciences and humanities. To wrap things up, we size up the mad upsurge of asylum seekers looking to settle in the west along with the decline in native European populations and what this means for our genetic continuity.

The War on Human Nature in Australia's Political Culture: Collected Essays
On Genetic Interests: Family, Ethnicity, and Humanity in an Age of Mass Migration
The 10,000 Year Explosion: How Civilization Accelerated Human Evolution
The Rise and Fall of Anglo-America
More of Mr Salter's books on Amazon 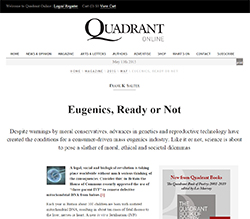