Frank Salter is an Australian academic and researcher at the former Max Planck Institute for Behavioral Physiology. He is a political ethologist, studying political phenomena using the methods and theories of behavioral biology in addition to conventional methods. He is the author of six books. In the first hour, Frank explains how the social sciences were radicalized in universities as a way to gain control of the culture. We’ll talk about the university departments of sociology, cultural anthropology and political science which are devoid of biologically-oriented courses and why the focus is on gender, ethnicity, feminism, sex differences, national identity, ethno-cultural diversity, multiculturalism and immigration. Later, we talk about a few of the iconic people that are praised by today’s social sciences, several of whom are known to have falsified scientific results. Frank says we must inject fact back into culture. In the second hour, we’ll discuss the effects of the social sciences’ rejection of human nature and how it has impacted current politics and culture. We’ll discuss what may happen if we continue to deny human nature. Later, Frank talks about admitting harsh realities and what we can do to move forward.

The War on Human Nature in Australia's Political Culture: Collected Essays
On Genetic Interests: Family, Ethnicity, and Humanity in an Age of Mass Migration

Eugenics, Ready or NotWar on Human Nature, Replacement Level Migration in the West & Crime of Diversity 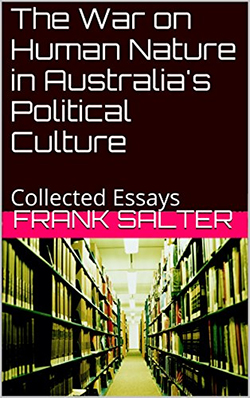