War on Human Nature, Replacement Level Migration in the West & Crime of Diversity

Frank Salter is an Australian academic and researcher at the former Max Planck Institute for Behavioral Physiology. He is best known for his writings on ethnicity and ethnic interests. He is a political ethologist, studying political phenomena using the methods and theories of behavioral biology in addition to conventional methods. He is the author of six books, including “On Genetic Interests: Family, Ethnicity, and Humanity in an Age of Mass Migration.” We begin by defining genetic interests and talk about kin selection and W.D. Hamilton. Frank says there is a huge misunderstanding when it comes to how media, education and modern mainstream cultural elites deal with the subject of race and ethnicity. We’ll discuss how social sciences have turned their back on nature, biology and evolution. Salter calls this the “war on human nature.” He’ll talk about the emergence of a new branch of the social sciences as a reaction to the realization that human nature was immovable and universal due to genetics. Franz Boas, an apologist for Stalin, who had an immense influence in anthropology, took the field in a new direction. Later, we discuss what Frank calls replacement level migration. For example, Whites will be a minority in America by 2040. Frank explains how diversity within a state is a positively dangerous concept that will destroy western civilization. We’ll discuss the alliance between the radical left and the ethnocentrism of minority groups. Frank says that the left suffers from “ethnic autism.” He talks about the double standards when it comes to the treatment of the western world and if applied to any other country or region, it would be unanimously denounced as atrocious. And we also discuss the misconception around claims of “superiority” in relation to White ethnicity. We end discussing what Frank calls the crime of diversity, universal nationalism and how the ethnic majority group is ignored under the multicultural concept.

On Genetic Interests: Family, Ethnicity, and Humanity in an Age of Mass Migration 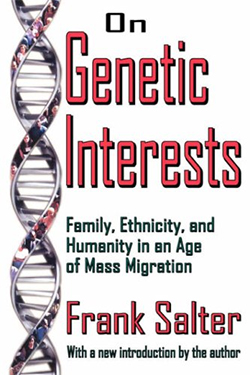