Finally Free After 16 Months in Jail

Dean Clifford has been part of the Freeman on the Land/Sovereign Movement for over a decade, a mission that has led him to unravel the legal system and inform himself about government policy enforcement. In standing up for his rights and exposing corruption, Dean has attracted a great deal of attention from the Canadian government and law enforcement, resulting in several arrests, dozens of bogus charges, and most recently the unlawful kidnapping and forced confinement for 16 months in a Manitoba jail for charges of which he remains unconvicted. Dean returns to Red Ice for a special extended segment to discuss his imprisonment, the circumstances surrounding the pending charges, and the indignities and injustices bestowed upon him in the name of Her Majesty the Queen in Right of Canada. Dean details what it means to be a political prisoner and explains the International Covenant on Civil and Political Rights. He talks about the illegitimacy of the courts and the oppressive governmental systems of slavery that do not protect the people’s rights and freedoms. We consider what it takes for citizens to protect themselves from the tyranny, and the importance of abandoning the ways of mass consumerism in order to turn things around. Dean spells out how we can reclaim our rights and freedoms through knowledge, and how to resign from the corrupt mainstream system by forming divestment communities that reinvest in the economies of functioning societies built by the people. We also look at globalism and the path leading towards world government, and the way to destroy our archaic, dogmatic institutes. We conclude with a promising look at the improvements individuals and communities can strive towards in order to lead less complicated, more rewarding, spiritually connected and full lives.

deanclifford.info
Freeman Dean Clifford Arrested
Dean Clifford Kidnapped with No Warrant, No Cause, No Authority 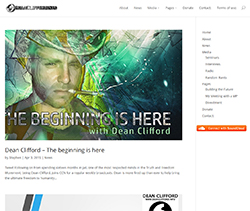