Oct 16, 2008
Kevin Annett, former minister of United Church, joins us on to talk about Canada's darkest secret, the genocide and the deliberate extermination of indigenous (Native American) peoples and the theft of their land under the guise of religion. Kevin Annett blew the whistle on his own church after he learned of thousands of murders in its Indian residential schools. In the first hour, we talk about the history of extermination, religion and the documentation and eyewitnesses from Canada’s genocide. We also discuss his film "Unrepentant: Kevin Annett and Canada's Genocide" as well as his website hiddenfromhistory.org. During the second hour, Kevin talks about the mentality of the people behind murder and abuse. We go deeper into the horrifying story of Canada's Genocide and put it into a large context, talking about ”empire” worldwide. We end the show on a positive note. Other topics we discuss include: church, state & corporations, trauma, sterilization, medical experimentation, pedophile networks, history of germ warfare, smallpox, tuberculosis, satanic ritual abuse, soulless men, the Decline of western civilization, "robotification" of humans, and the connection to the Earth.

28 Canada Mass Grave Genocide Sites Identified - Where Is The Media? 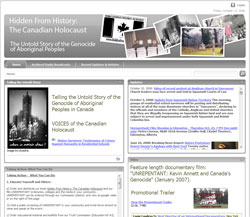