Writer, Brent Jessop who started the former website knowledgedrivenrevolution.com discusses his article series on “The Scientific Outlook”, “The Club of Rome” and “The Philosophy and Purpose of UNESCO”. Brent also talks about the “Big Picture”: where are we, where are we going and what's wrong with the world? We also discuss: "waking up", different world views, the comfort of the slumber, sharing information and "mass awakening”. During the second hour, Brent talks about The Club of Rome, the climate change fraud, UNESCO, Julian Huxley and Bertrand Russell. We begin by discussing the background on The Club of Rome and the founders: Alexander King, Aurelio Peccei and the influence of Maurice Strong. Later, we discuss how science is being skewed to shape society and create opinion to further enslave us into the system. We also talk about how to manage society scientifically, population reduction, reproduction, eugenics, cloning, disease, consumerism, Fred Singer and controlled opposition. Towards the end, we talk about how our perception is being manipulated via media and most people never really get in contact with who they are. We discuss the human potential, how to how to get in contact with yourself and break the spell of control. 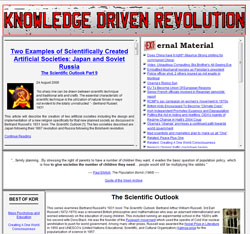