Jan 31, 2014
William Lyne was born in Big Spring, Texas and raised in West Texas oil boom towns and ranching country. His bio states that he had a Top Secret clearance in Air Force Intelligence, earned a B.S. degree with a double major in Art and Industrial Technology from Sam Houston State University in Huntsville, Texas, acquired an M.F.A. in Studio Arts from the University of Texas at Austin in 1969, and has lived in New Mexico for over 28 years. In 1975, he rejected a high-paying and prestigious executive CIA position offered by then director George Bush, because he believes the National Security Act of 1947 is an illegal betrayal of American Sovereignty and liberty, and that the flying saucer, as man's greatest invention, should be enjoyed by all. In the first hour, we discuss occult ether physics and Tesla's hidden space propulsion system and the conspiracy to conceal it. He talks about how the secret government—a fraudulently concealed, unconstitutional, corporate-state entity—has controlled electropulsion technology by concealing it and other advanced free energy technology, on behalf of international, coercive, corporate-state monopolists. In the member's hour, we'll hear about the occult science dictatorship. William says powerful economic interests, which also control the government, the mass media and academic institutions, have used scientific thought-control for sinister means. This includes the invention of scientific and metaphysical theories that lead to nowhere. William shares his experiences with UFOs, which he says are man-made. He also talks about propaganda surrounding aliens, which is all part of a plot to conceal technology. 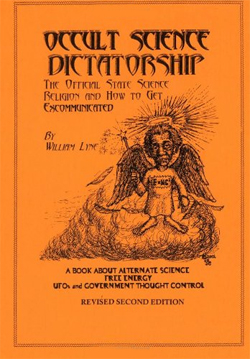