May 25, 2015
Dr. Colin Ross is an internationally renowned clinician, researcher, author and lecturer in the field of dissociation and trauma-related disorders. He is the founder and President of the Colin A. Ross Institute for Psychological Trauma and has been running a hospital-based Trauma Program in Dallas, Texas since 1991. Dr. Ross has authored over 170 professional papers and several books, including "The C.I.A. Doctors: Human Rights Violations by American Psychiatrists" and "The Great Psychiatry Scam." Dr. Ross is with us to speak about his work in the fields of psychological trauma and CIA & military mind control. In the first hour, we learn about the creation of the Central Intelligence Agency and its first mind control venture, Operation Blue Bird, which is later rolled into MKUltra. Colin describes now declassified CIA documentation pertaining to the beginnings of MKU, detailing different overlapping foundations of the interrogation and brain washing world that are still being used to this day based on photographic evidence coming out of Guantanamo Bay and Abu Ghraib. Colin explains how military and intelligence agencies select for susceptible individuals, commonly those who have already been traumatized, abused, or have multiple personalities. Dr. Ross talks about some of the strange connections to networks of professional psychiatrists, military doctors and MKU contractors he uncovered during his research. In the members hour, Colin gives an overview of the emergence of LSD from the CIA and military realm beginning in the 1950s, and he gives anecdotes of psychedelic experiments that were conducted in order to test mind control techniques. We move on through the areas of satanic ritual abuse and pedophilia in certain elite circles, as well as electromagnetic weaponry and transhumanism. Then, we touch on the use of general propaganda as a mechanism for control, sophisticated technology that is targeting unwitting consumers, and the resulting degradation of will that is infecting our societies on the whole. We wrap up the conversation with an evaluation of the pharmaceutical industry’s role in the field of psychiatry. 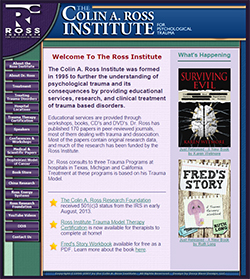