Jan 19, 2015
Tom Goodrich has been a professional writer for the past thirty years. In addition to articles, blogs and movie scripts, Tom has written a dozen books. After serving in the US military during the Vietnam War, he traveled and lived abroad, including stops in Greece, Germany and Morocco. The author now lives on the Gulf Coast of Florida. Tom returns to Red Ice Radio to discuss his latest book, Scalp Dance: Indian Warfare on the High Plains, 1865-1879. This historical story, which draws greatly from diaries, letters and memoirs of American Plains settlers moving west after the Civil War, serves as a corrective account of a pivotal period that has been sensationalized and propagandized in Hollywood movie portrayals and in American Marxist Academia. Tom outlines some of the mantras about American Indians that have been hammered into the mass consciousness of Americans and used to perpetuate White guilt. Then, Tom talks about key points left out of the narrative, including the circle of violence and war that already existed amongst various tribes, and the fact that when it came to fighting the settlers, it wasn't always all White against all Red. We discuss the nature of rape amid the Indian people, and their use of bloody, sadistic torture that was considered the highest art form. Further, Tom details accounts of enslavement, rape and torture of captured White women, widely recognized as a fate worse than death. We look at this atrocious part of history that has been romanticized and skewed in trashy American novels and propaganda films. Tom explains why the White people were so furious with the Indians, carrying out atrocities that were retaliation for unimaginable crimes against them. In the second hour, we talk about the many sacrifices made by the European people in the creation of America. We consider the exploding population of new American immigrants, the general distrust and hatred for the current government, and the undeniable signs of a country at the precipice of collapse. We discuss Christian mantras such as "turn the other cheek" and "forgive and forget," which are in truth philosophies of slavery and tools for disassociation. Later, Tom tells us about the fine points of his upcoming book, Rape Hate, a cumulative piece that looks at the prevalence of rape in war, the undeclared war on women, pornography's spiritual massacre of women, and culture clashes that are exacerbating this radical plague. We conclude with some thoughts on the White people disease of paranoia, and reflect on the true history of progression. 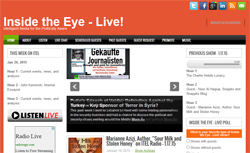