Tom Goodrich has been a professional writer for the past thirty years. In addition to articles, blogs and movie scripts, Tom has written a dozen books. Kyle Hunt received his Bachelor of Arts in psychology and is best known for founding the Renegade Broadcasting network. Tom and Kyle return to the program to discuss their monumental collaboration, the documentary film Hellstorm, based on Tom’s book and produced by Kyle. In the first hour, we discuss the impetus of the film, which is to expose the mountain of hate, lies and propaganda that was heaped upon the defeated German nation in the time period surrounding WWII, in what is truly the darkest and best kept secret in world history. We look at the relevance of unmasking the accepted history of WWII, a narrative that fundamentally excludes the truth about the horrific slaughter of tens of millions of innocent German civilians by Soviet communists. We talk about the massive amount of money that has been dumped into Israel as a result of the “crimes” for which Germany has been forced to pay reparations. Then, we consider why the success story of Hitler’s Nazi Germany was so dangerous to the rest of the world. In the members’ hour, we look back to the tremendous movement of German people at the tail end of WWII that was punctuated by the tragic sinking of the Wilhelm Gustloff in the Baltic Sea, resulting in the largest loss of human lives at sea in recorded history. Tom details the gruesome lead-up to this unfathomable mass murder – a killing, raping, and torture spree unleashed on the Germans in a sadistic and depraved display of power by the Russians and Americans alike. Later, we discuss the psychological devastation of WWII that continues to plague our world. In conclusion, we examine the underpinnings of the present-day war industry.

Scalp Dance: Indian Warfare on the High PlainsHellstorm: The Myth of the Good WarWhite Identity in a “Post Racial” SocietyThe Gods of Technology 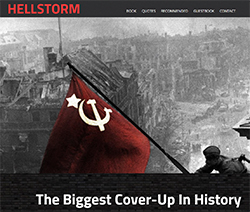