Hellstorm: The Myth of the Good War

Sep 17, 2014
Tom Goodrich, majored in history and also psychology. He painted watercolors for a living in New England before authoring 10 books. He has written books on the American Civil War, the Indian Wars, the assassination of Abraham Lincoln, World War II and many more. We’ll discuss his book Hellstorm: The Death Of Nazi Germany, 1944-1947, which details the most deadly and destructive war in human history where millions were killed, billions in property was destroyed and ancient cultures were reduced to rubble. WWII was truly man's greatest cataclysm. Although thousands of books, movies and documentary films have been devoted to the war, there has never been such a terrible retelling of the story as found in Tom’s book. We’ll begin discussing events prior to the war and talk about the nation that defied the elite global order. Tom tells about WWII “good war” propaganda and what’s not said. Tom also talks about the dark secrets of the allies who tortured, raped and unleashed sadistic behavior upon Germans. We’ll hear about the millions of innocent German civilians, including women and children who were massacred. He’ll also talk about the worst nautical disasters in history which claimed thousands of lives, the greatest mass migration known to man in which millions perished and the fate of those wretched victims in post-war death camps and torture chambers. We’ll continue with post-war events and the denazification of Germany. Later, Goodrich shares stories he uncovered, some humane, involving fighting soldiers. Also, we’ll discuss the post- war ransacking of German inventions and patents. At the end of the member’s hour, we touch upon mass immigration, taking back our countries from government traitors and creating a new framework for when the blowback hits home.

Hellstorm: The DocumentaryScalp Dance: Indian Warfare on the High Plains 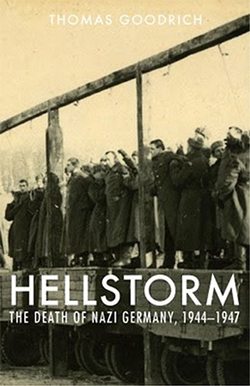