Sweden: No Diversity in Politics and Media

A CBN News veteran, Dale Hurd began his journalism career in 1982 at a daytime only AM radio station in Kalamazoo, Mich. In 1987 he joined the CBN Radio Network as a program host and news anchor. Dale has reported extensively from Western Europe, as well as China, Russia, and Central and South America. Dale's first foreign assignment to Moscow in 1991 was just months before the eventual breakup of the Soviet Union. It remains his favorite stint. "It was clear to me, as soon as we landed in 1991, that the Soviet Union was finished," he says. Dale also covered China's opening to capitalism in the early 1990s, as well as the Yugoslav Civil War. Since 9/11, Dale has reported extensively on various aspects of the global war on terror in the United States and Europe. In this program, we’ll discuss the restrictions of free speech in Sweden and the extremely narrow political spectrum in Scandinavia. The media is controlled by the left only perspective. A different perspective is seldom heard. When it is, it is fiercely demonized usually as hate speech. A very effective measure to control population is through economic policy and the Nordic model has perfected this art like no other. We’ll compare the American system to Sweden and how they are beginning to become more similar with each other. Dale addresses the program of mass immigration into Scandinavia and Europe and the consequences of the growth of Islam as the west, and Scandinavia in particular, is entering a spiritual vacuum where atheism and scientism has become the new state religion. Hurd also talks about the 68ers and misdirected idealism. Lastly, we discuss US foreign policy. 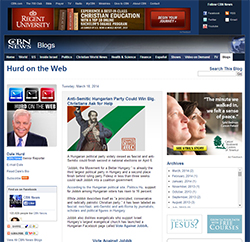