The Ancient Giants Who Ruled America

Jan 27, 2014
Richard J. Dewhurst is the Emmy Award–winning writer of the HBO feature documentary Dear America: Letters Home from Vietnam. A graduate of NYU with degrees in journalism, film, and television, he has written and edited for the History Channel, the Arts & Entertainment Channel, PBS, Fox Television and Fox Films, ABC News, TNT, Paramount Pictures, and the Miami Herald. He lives in Vermont. We'll discuss his book, The Ancient Giants Who Ruled America. Drawing on 400 years of newspaper articles and photos, first person accounts, state historical records, and illustrated field reports, Richard J. Dewhurst reveals not only that North America was once ruled by an advanced race of giants but also that the Smithsonian has been actively suppressing the physical evidence for nearly 150 years. He'll discuss how thousands of giant skeletons have been unearthed at Mound Builder sites across the continent, only to disappear from the historical record. We'll hear about giant discoveries in locations such as Nevada, Florida, California and the ruins of the giants' cities with populations in excess of 100,000 in Arizona, Oklahoma, Alabama, and Louisiana. In the second hour, Dewhurst speaks more on the suppression of this evidence and the cover up. Today, ancient mounds have no official protection and are being bulldozed for parking lots. American Indians are preventing research of mounds, although they admit they did not build them. We'll hear about where some of the giants' bones are today. Richards also talks about an old, advanced nautical culture and ancient European migration to the USA. Later, we discuss the distorted picture of what America was like despite evidence of a coordinated social structure that celebrated making earth a sacred landscape, long before our arrival.

The Ancient Giants Who Ruled America: The Missing Skeletons and the Great Smithsonian Cover-Up 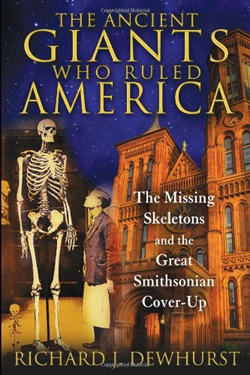