The Creature From Jekyll Island & The Capitalist Conspiracy

Jul 5, 2007
Writer and documentary filmmaker G. Edward Griffin talks about his book, "The Creature from Jekyll Island" and his video "The Capitalist Conspiracy". Topics Discussed: Thoughts on 4th of July, world government, collectivism: "for the greater good", the delusion of democracy, mind control, body control, growth of government, the human spirit & the awakening, manufactured international terrorism, the fear factor, the dual factor of exposing the hidden hand, the root of the problem: a philosophy or ideology, social engineering, the creature and Jekyll Island, the Federal Reserve system, JP Morgan, Rockefeller, Wall Street, and the money trust. During hour two, G. Edward Griffin begins talking about the Federal Reserve system. He tells us what it is and how it works. Topics Highlighted: the hybrid Federal Reserve system, the banking cartel, creating money, how banks make money, the capitalist conspiracy, the fraud behind the left and right politcal wings, Hugo Chavez, George Bush, Ron Paul, solutions and Mr. Griffin’s organization "Freedom Force International".

The Capitalist Conspiracy: An Inside View of International Banking by G. Edward (Video)

The Bankers Manifesto of 1892

The People vs The Banks

The capitalist conspiracy
The Creature from Jekyll Island 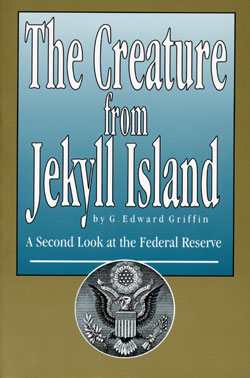