Nov 9, 2008
Jan Irvin is an independent researcher, author and lecturer in archaeoastronomy, astrotheology, ethnopharmacology, shamanism, symbolism, ancient and modern mythology, fertility cults, and ancient and modern religion. He co-authored the book “Astrotheology & Shamanism: Unveiling the Law of Duality in Christianity and Other Religions” with Andrew Rutajit. He also co-produced the DVD “The Pharmacratic Inquisition”, also with Andrew Rutajit. He is the curator of the official website for John Marco Allegro, the much criticized Dead Sea Scrolls scholar, and has contributed much to the re-examination of many of Allegro’s theories. He contributed research toward the academic article “Wasson and Allegro on the Tree of Knowledge as Amanita”, with Michael Hoffman. He brings with him over 15 years of research into the study of ethno-pharmacology and drugs. For the first hour, Jan discusses his book "The Holy Mushroom - Evidence of Mushrooms in Judeo-Christianity", a critical re-evaluation of the schism between John Allegro and Gordon Wasson over the theory on the entheogenic origins of Christianity that is presented in John Allegro's book, “The Sacred Mushroom and the Cross”. During hour two, we talk more about the schism between John Allegro and Gordon Wasson and the symbolism behind the concept of Jesus as a mushroom and the fact that some cardinals and bishops to this day are dressed up as mushrooms. We talk about religious art work that contains references to the mushroom, the Mandeans, Lucifer, the Devil, the Jesus Seminar, symbolism in St. Marks Basilica in Venice and much more.

Wasson and Allegro on the Tree of Knowledge as Amanita 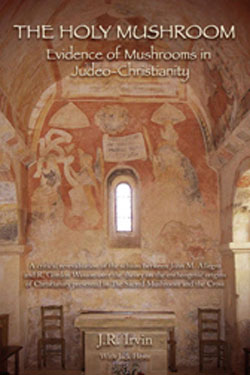