The Last Days of the Lunatic Left

Oct 16, 2015
Daniel Friberg holds an MBA from the Gothenburg Business School, is currently the CEO of the Swedish mining company Wiking Mineral, and a founding member of the Swedish metapolitical think-tank Motpol. He is the co-founder and CEO of the British publishing house Arktos Media Ltd., and editor at RightOn.net. The English version of Friberg’s book, "Return of the Real Right: A Handbook for the True Opposition,” is now available.

Daniel returns to Red Ice to continue our recent conversation concerning the return of the Real Right and how Europeans and Americans alike can be an effective part of the rising opposition to the lunatic left. We discuss Sweden’s position as the test lab in the deteriorating European multicultural experiment, and the growing awareness that we have arrived at a crucial point in history that demands a serious fight for survival. Daniel offers some advice for men and women of the Western world who have been confused and beat down by the rotten cultural Marxist system and its war on traditional gender roles. We discuss the consequences of modernity and feminist ideals that have led to a radical drop in birth rates over the past few generations. We focus on the monumental task of reversing the unsustainable leftist agenda that has promoted a dysfunctional European culture now threatened by replacement level immigration. Then, we take a deeper look at the social conditioning of the abusive educational system, and how we can encourage our younger generations to truly rebel against the indoctrinating garbage they have been fed by embracing traditional ideals.

In the second hour, we discuss the situation in Syria and Russia’s recent moves to topple the Islamic state and ISIS. We talk about why Assad has been under attack by the globalist elite, and what’s next in line for the conflict if the US and Israel continue to push their destructive foreign policy in the Middle East. Then, Daniel gets into some of the absurd talking points of Swedish government officials that have been used to justify the country’s insane immigration invasion. We consider Hungary’s opposite and very Nationalistic stance in the fight to maintain secure borders and cultural homogeneity, and we look at how past territory wars have strengthened Hungary and its neighboring countries. At the end, we sum the progress that is being made by nations who are ready to be free from the liberal establishment of the EU and the Euro Zone. 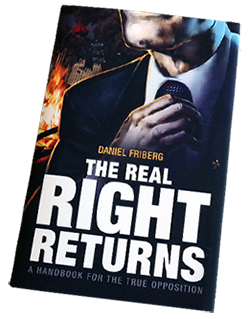