Sep 18, 2015
Daniel Friberg holds an MBA from the Gothenburg Business School, is currently the CEO of the Swedish mining company Wiking Mineral, and a founding member of the Swedish metapolitical think-tank Motpol. He has a long history within the Swedish Rightist opposition, and was one of the founders of the traditionalist publishing house, Arktos Media Ltd. He is also the author of the recently published "Högern kommer tillbaka: Handbok för den äkta oppositionen,” and its forthcoming English translation, "Return of the Real Right: A Handbook for the True Opposition.”

Daniel is with us for a conversation about the rapid transformation of Europe that is underway due to the swelling immigration crisis, and strong indications that Europeans are finally waking up to the madness of the situation. Friberg recounts his first encounters with multiculturalism in Sweden and what prompted him to dedicate his life to constructively counterbalancing the opposition to the leftist lunacy that favors the replacement of its population. We discuss the dishonesty of the Swedish mass media and malicious propaganda that has kept its citizens in a collective trance, unable to see the grim consequences of unfettered immigration. Daniel emphasizes the importance of understanding metapolitics in navigating our current discourse - an angle that has been fundamentally neglected by the leftist dominated cultural sciences. We consider the political elite’s overt agenda to mix out the White European race, and Daniel breaks down Sweden’s cultural Marxist-ruled political structure.

In the members’ hour, Daniel continues on the subject of the so-called Syrian refugee crisis, which can be deduced to an all-out invasion and involuntary conversion of Europe. We get into the violent and destructive track record of the Islamic state and its ongoing, escalating conflict with Europe that cannot be ignored when sorting out the mess of Western civilization. We delve into the psychological warfare used in the push towards a multiculturalized world, along with the rising popularity of pro-European attitudes in favor of protecting and restoring its own traditional culture. Then, we look the increasing support of the Swedish Democrats and what the party’s politically correct shift means for the real right. We deliberate the mainstream media’s deceitful coverage of the social conflict created by mass immigration, and look hopefully to the unavoidable death of the old ways that will be crucial to the rebuilding of Europe.

Rising From the Ruins: Identitarian Movement in EuropeAlt Right 2016The Last Days of the Lunatic Left 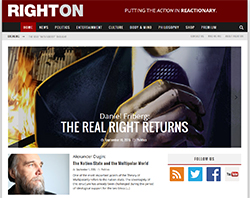