May 23, 2014
D.M. Murdock, also known by her pen name, "Acharya S," is the author of several books on comparative religion and mythology, including "The Christ Conspiracy," "Suns of God," "Who Was Jesus?" and "Christ in Egypt." Murdock is an alumna of Franklin & Marshall College in Lancaster, PA, where she studied Classics, Greek Civilization. She has lived in Greece and is also an alumna of the American School of Classical Studies at Athens, Greece. She speaks, reads and/or writes to varying degrees English, French, Spanish, ancient and modern Greek, Latin, German and other languages. Acharya S has gained expertise in several religions, as well as knowledge about other esoterica and mystical subjects. In the first hour, we’ll discuss her latest research “Did Moses Exist? The Myth of the Israelite Lawgiver.” Although many scholars today are clear on the mythical nature of the Exodus tale and the probable (to them) non-historicity of the Moses character, there are a number of historical or quasi-historical individuals and events that have gathered attention as the possible "real Moses" and "real Exodus." In the second hour, we’ll look deeper into the origins of the Jewish tribe, Yahweh and the Ten Commandments. She provides comparative mythology or mythical motifs also found in other cultures that relate to the Moses myth, the Ark of the Covenant and more. She’ll talk about the profound correspondences between the tales of Moses and the Greek god Dionysus. We’ll also talk about Yahweh supremacy and the foisted idea of the “chosen people.” Later, we’ll talk about the danger of disconnecting from our ancestral cultural heritage and how it creates a hatred of the natural world and disconnects us from nature. Our ancestors maintained tradition and mythology for important reasons. The Arahamic religions have swept across European countries, replacing imperative ancient myths with disastrous results. We discuss maintaining culture and heritage in a forced multicultural world. We’ll talk about those who are attempting to override European shared heritage to replace it with something far worse.

Did Moses Exist? The Myth of the Israelite Lawgiver
The Christ Conspiracy: The Greatest Story Ever Sold
The Origins of Christianity and the Quest for the Historical Jesus Christ
Acharya's Religion 101 for Seekers
The Gospel According to Acharya S
Who Was Jesus? Fingerprints of The Christ
Suns of God: Krishna, Buddha and Christ Unveiled
Christ in Egypt: The Horus-Jesus Connection
Jesus as the Sun throughout History
The Astrotheology Calendar Guide
Great Minds of Our Time: D.M. Murdock 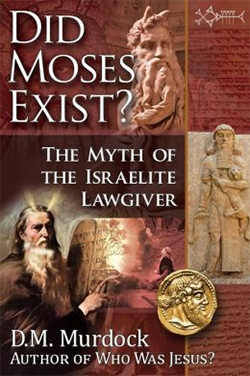