Jan 22, 2009
David Livingstone, born in Montreal Canada, began studying towards a Bachelors degree in Western Civilization, at the Liberal Arts College, of Concordia University in Montreal. This college was an experimental program that, instead of studying courses randomly in a given subject, over a period of three years, would coordinate three courses simultaneously, in history, literature and art, beginning with Homer and the Bible, following all the major movements of Western Civilization, culminating in the twentieth century. It was while reading the textbooks provided to him there that he first encountered the curious reference to the emergence in ancient times of the "Indo-European" people, the supposed ancestors of modern-day Europeans, from the mountains of the Caucasus. It was as he began to search out the evidence behind the theory, which he discovered to be founded in an occult doctrine, that revealed the existence of a hidden tradition in the West. David is the author of of "Terrorism and the Illuminati - A Three Thousand year History" and "The Dying God - The Hidden History of Western Civilization". David returns to the program to talk about the Muslim Brotherhood, The Wahhabis, The Mandeans, the Johannite and the Hashshashin's. We begin by briefly talking about Obama and his alleged Muslim ties. Then, we discuss Hassan al-Banna, Mandeans, Sabians, Sufism, Kabbalism, Zohar, Hashshashin, Knights Templar, Jamal al-Din al-Afghani, Asiatic Brethren, Sabbatai Zevi, Jacob Frank and much more. For our members, David speaks about the modern "boogey man" Al-Qaida and the connection to western Intelligence agencies as well as the philosophy of Jihadd. Then, he talks about the CIA. More Topics Discussed: Selefi, the background on the Muslim Brotherhood, Asiatic Brethren, The Wahhabis, Egyptian Freemasonry, Cagliostro, J.E. Marconis, Lord Palmerston, occult roots of the Nazi ideology, Theodor Reuss, OTO, Aleister Crowley, Jamal Afghani, The Hermetic Brotherhood of Light, Otto Skorzeny, power of nightmares, Baha'i Movement, Kissinger, petrodollar recycling, oil, drugs, opium, cocaine, Taliban, Afghanistan, The Ottoman Empire, BCCI (Bank of Credit and Commerce International), Clinton, Barry Seal, Garry Web, Ibn Saud, Osama Bin Laden & "Tim Osman" and Mumbai terrorist attacks.

Table of Contents for Terrorism and the Illuminati

Pawns in the Game by William Guy Carr

DC9 With 5.5 Tons of Cocaine Was CIA Plane

The Power of Nightmares Part 1: Politics - “Baby it's Cold Outside“

The Power of Nightmares Part 2: The Phantom Victory

The Power of Nightmares Part 3: The Shadows in the Cave

Terrorism and the Illuminati: A Three Thousand Year History 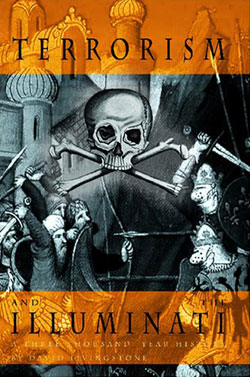